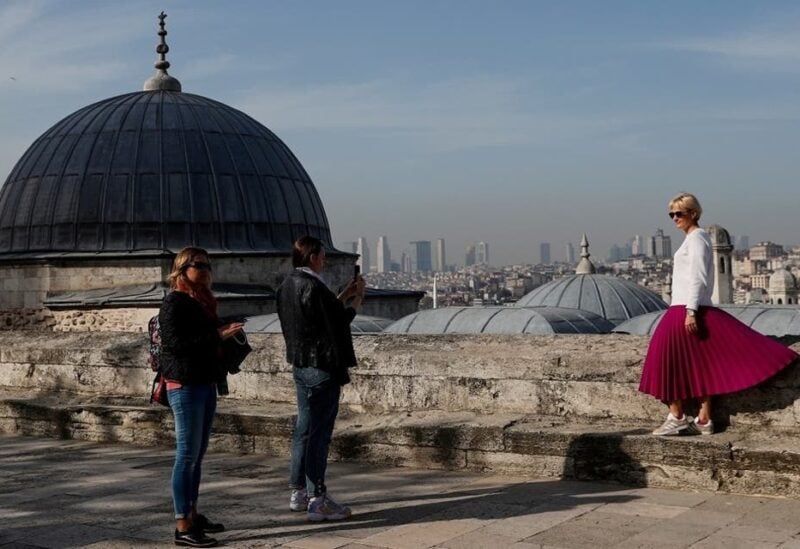 A tourist poses for a souvenir photo outside the historic Suleymaniye Mosque in Istanbul, Turkey, during a nationwide lockdown of the local population imposed to slow the spread of the coronavirus, on April 30, 2021. (File photo: Reuters)

Turkey has identified three cases of the new Delta Plus COVID-19 variant in three provinces, its health minister said on Monday, adding that the separate Delta variant had also been identified in some 284 cases across 30 provinces.

Some scientists say the Delta Plus variant may be even more contagious.

Turkey, which eased most restrictions on July 1, has reported nearly 5.5 million COVID-19 cases and some 50,000
deaths in total. A vaccination program has ramped up to more than a million shots per day.

“The Delta Plus (variant) was seen in three people in three separate provinces (including) one in Istanbul,” Health Minister Fahrettin Koca told reporters after a cabinet meeting on Monday.

“These people are in good condition.”

Turkey’s vaccine program began in January with shots developed by Sinovac and has since also been using vaccines by Pfizer and Biontech, and Russia’s Sputnik V.

Koca said Turkey currently had some 8 million shots and would receive another 26 million Pfizer-BioNtech doses this month, and 1.5 million doses of Sinovac next week.

He said Turkey aimed to administer the first dose of a vaccine to some 43 million people by the Eid al-Adha holiday on July 20, accounting for 70 percent of the country’s adult population.

“The vaccine doses received up to now are enough and the ones we have on hand are also enough,” Koca said.

Turkey has delivered 53 million shots in total with 15.92 million people having received a second dose out of a population of around 84 million.