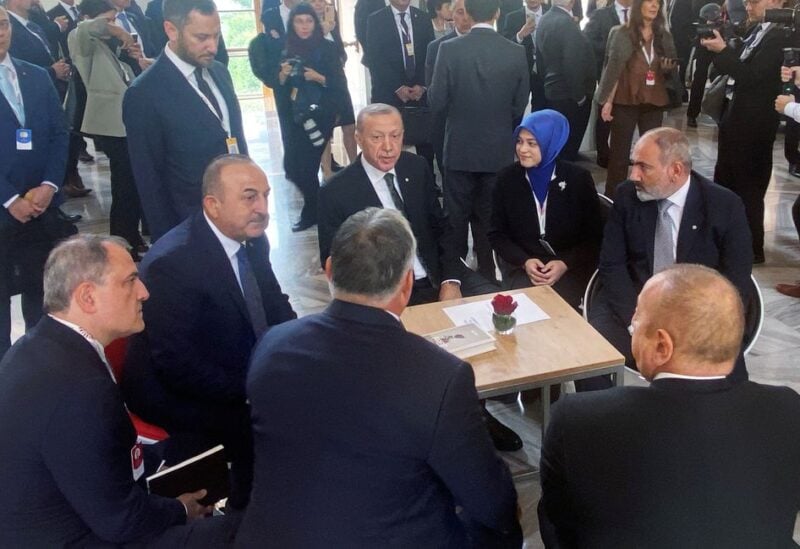 According to Turkish media, Turkish, Armenian, and Azeri leaders met informally at a European summit on Thursday, marking the first top-level meetings between Turkey and Armenia since they made a push to heal ties late last year after decades of antagonism.

President Tayyip Erdogan talked with Armenian Prime Minister Nikol Pashinyan and Azeri leader Ilham Aliyev ahead of the Prague meeting, according to the state-owned Anadolu news agency, which published a photo of them seated with others at a small table.

In January, Turkey and Armenia held a first round of talks in more than 10 years, describing them as “positive and constructive” and raising the prospect of restoring ties and reopening borders.

Ankara has not had diplomatic or commercial ties with Armenia since the 1990s. The latest initiative is the first attempt to restore links since a 2009 peace accord that was never ratified.

Tensions flared during a 2020 war over the Nagorno-Karabakh territory. Turkey accused ethnic Armenian forces of occupying land belonging to Azerbaijan, but it subsequently called for a rapprochement as it seeks to broaden its regional influence.

Turkey and Armenia are at odds primarily over the 1.5 million people Armenia says were killed in 1915 by the Ottoman Empire, the predecessor to modern Turkey.

Amid the normalization efforts, a commercial flight from Yerevan landed in Istanbul in February in the first such direct flight in two years.

Turkish Foreign Minister Mevlut Cavusoglu met his Armenian counterpart Ararat Mirzoyan at a diplomatic forum in southern Turkey in March and said they had a very “productive and constructive” meeting.

That was the first sit-down meeting between the two countries’ foreign ministers since 2009. They spoke briefly on the sidelines of an OSCE meeting last November.

Erdogan has previously said Armenia needed to form good ties with Azerbaijan for the normalization effort to yield results.