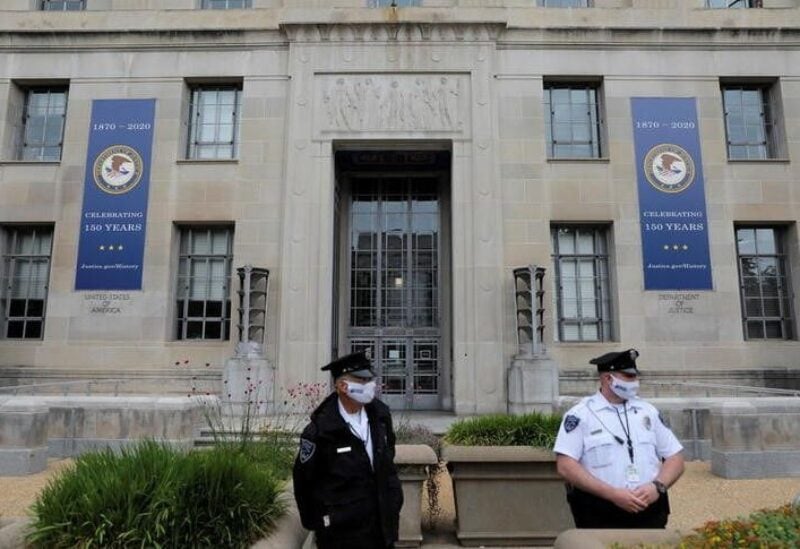 Security stand guard at the headquarters of the United States Department of Justice (DOJ) in Washington, D.C., U.S., May 10, 2021. REUTERS/Andrew Kelly

Sezgin Baran Korkmaz, a Turkish businessman, was charged with money laundering and wire fraud after being extradited from Austria and arriving in Utah on Friday, according to a statement from the US Justice Department.

The U.S. Marshals Service took possession of Korkmaz when he arrived.

He was charged earlier in Utah with laundering more than $133 million in illegal proceeds through bank accounts he controlled in Turkey and Luxembourg, the Justice Department said. The United States said last year it was seeking to extradite him.

If convicted, Korkmaz faces a maximum penalty of 20 years in prison for each count of money laundering conspiracy, wire fraud and obstruction of an official proceeding, the department said.

U.S. prosecutors say the fraud proceeds stemmed from a scheme involving the filing of false claims for more than $1 billion in renewable fuel tax credits for the production and sale of biodiesel by Utah-based Washakie Renewable Energy LLC.

Korkmaz and co-conspirators allegedly used the proceeds from the scheme to buy the Turkish airline Borajet, hotels in Turkey and Switzerland, a yacht named the “Queen Anne” and a villa and an apartment on the Bosphorus in Istanbul, the Justice Department said.

In coordination with authorities in Lebanon, the U.S. Marshals Service took the “Queen Anne” yacht into custody in July 2021 and sold it earlier this year for $10.11 million pursuant to an October 2021 order of a U.S. judge.

Korkmaz was arrested in June last year in Austria at the request of the Justice Department. He additionally faced charges of money laundering in Turkey.

Turkey had also initiated an extradition process with Austrian authorities and in August 2021, an Austrian court ruled to extradite him to Turkey.