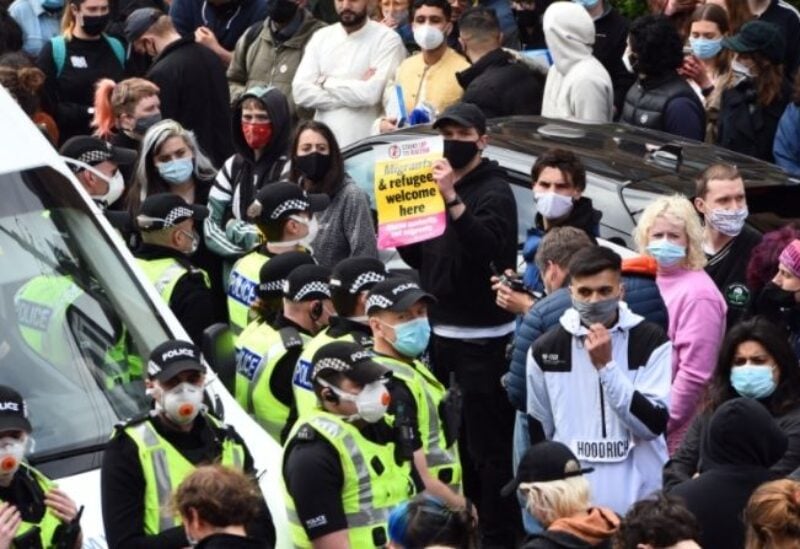 Two Indian men who were detained under UK Home Office orders in Scotland said they were “astonished and overwhelmed” after hundreds of protesters prevented them being taken away from the scene.

Protesters surrounded an immigration enforcement van on Thursday afternoon after officers took the men from a flat in the south of Glasgow.

Scottish First Minister Nicola Sturgeon said the raid, carried out on Eid in an area with a large Muslim population, was “staggeringly irresponsible”.

The Home Office said the men were detained over suspected immigration offences.

Lakhvir Singh, who was apprehended with Sumit Sehdevi, praised protesters for effecting his release.

“I’ve been astonished and overwhelmed by the support I’ve received from the people of Glasgow,” he said.

“At around 9.30am immigration enforcement carried out a raid and we were taken to security in the van. There were only five or six people at the time but word spread and then there were crowds of hundreds. We are so grateful for the support.”

Protesters shouted “let our neighbours go” and “cops go home” as a standoff with police escalated, while one man crawled underneath the van to prevent it from leaving the scene.

Police Scotland said they stepped in to ensure the release of the men on public safety grounds. The force said its officers did not assist in the removal of the asylum seekers but were on hand to monitor the protest.

Footage from the scene, shared on social media, showed the crowd erupting into cheers when the detainees were let go.

The incident made front-page news in Scotland, with headlines including “people power”, “human shields” and “Glasgow 1 Team UK 0”.

Ms Sturgeon said the Home Office needed to ask itself “hard questions” on why the raid took place.

“Doing this on Eid, in the heart of our Muslim community, and in the midst of a serious Covid outbreak was staggeringly irresponsible – but the even deeper problem is an appalling asylum and immigration policy,” she said.

The Home Office said the British government would continue to take action against those “with no right to be in the UK”.

“The operation in Glasgow was conducted in relation to suspected immigration offences and the two Indian nationals complied with officers at all times,” it said.

“The UK government continues to tackle illegal migration in all its forms and our New Plan for Immigration will speed up the removal of those who have entered the UK illegally.”

“The UK government’s hostile environment is not welcome here. I abhor Home Office immigration policy at the best of times, but to have taken the action they have is at best completely reckless and at worst intended to provoke.”

“Not close to the details on this but this is shocking, disgraceful and racist if people are raided by enforcement officers amid the pandemic on the day of Eid,” he said.