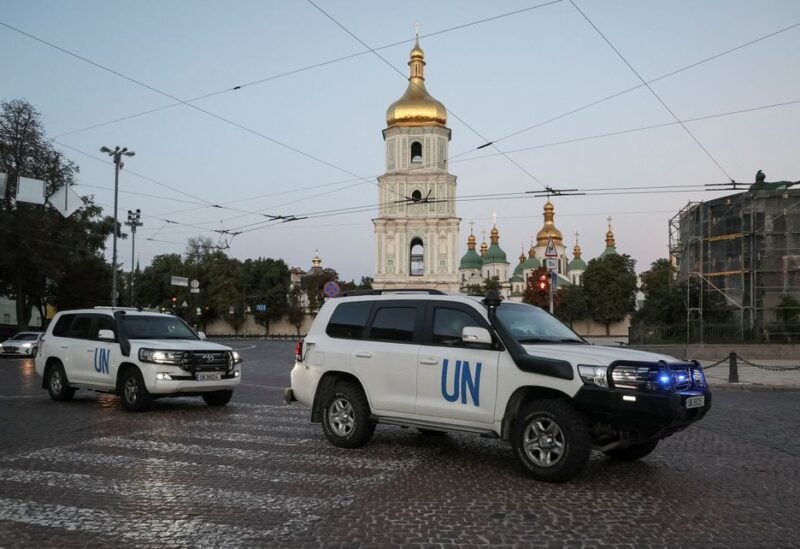 United Nations nuclear experts left Zaporizhzhia for a visit to a Russian-occupied nuclear power plant in Ukraine’s south to inspect any damage, despite reports of fighting in the area from both sides of the war.

Conditions at Europe’s largest nuclear reactor, Zaporizhzhia, have been deteriorating for weeks, with Moscow and Kyiv trading blame for shelling in the area, fueling worries of a radioactive disaster.

The chief of the International Atomic Energy Agency (IAEA) said the mission was aware of “increased military activity in the area” but was pressing ahead with its plan to visit the facility and meet staff.

“Having come so far, we are not stopping,” Grossi said.

The mission arrived in Zaporizhzhia, 55 km (34 miles) from the plant, on Wednesday and Ukraine’s defence ministry said it was scheduled to visit the facility on Thursday.

“It’s a mission that seeks to prevent a nuclear accident,” Grossi told reporters on Wednesday.

Russian-installed officials have suggested that the team from the U.N. nuclear watchdog would have only a day to inspect the plant, while the mission is preparing for longer.

“If we are able to establish a permanent presence, or a continued presence, then it’s going to be prolonged. But this first segment is going to take a few days,” Grossi said.

The general staff of Ukraine’s armed forces reported early on Thursday fighting near the plant and Oleksandr Starukh, the head of the Zaporizhzhia region, said Russian troops were shelling the route of the IAEA mission planned to use to get to the plant.

“The UN advance team cannot continue to move due to security reasons,” Starukh wrote on the Telegram messaging app.

Russia’s Defence Ministry said Ukrainian forces had attempted to seize the plant with up to 60 Ukrainian soldiers crossing the Dnipro river, which divides territory held by the two sides, in boats in what it called a “provocation” aimed at disrupting the IAEA visit.

Both sides have claimed battlefield successes amid a new Ukrainian push to recapture territory in the south.

“It is a very slow process, because we value people,” said Oleksiy Arestovych, an adviser to President Volodymyr Zelenskiy, referring to the Ukrainian offensive.

“There will be no quick success.”

Russia captured large tracts of southern Ukraine close to the Black Sea coast in the early weeks of the over six-month-old war, including in the Kherson region, north of the Russian-annexed Crimean Peninsula.

Elsewhere, Ukraine repelled Russian attacks in the direction of Bakhmut and Avdiivka, towns north of the Russian-occupied city of Donetsk, its armed forces’ general staff said.

Pro-Russian troops have focused on Bakhmut in their push to extend control over the Donbas region, Ukraine’s industrial heartland in its east, the general staff added on Wednesday.

Russia has denied reports of Ukrainian progress and said its troops had routed Ukrainian forces.

Russia sent its troops over the border on Feb. 24 for what it calls a “special military operation” to rid Ukraine of nationalists and protect Russian-speaking communities.

Ukraine and the West describe Russia’s actions as an unprovoked war of aggression that has caused millions to flee, killed thousands and turned cities into rubble.

The conflict has also spurred worries of a Chornobyl-style radiation disaster at the Zaporizhzhia plant, which was captured by Russia in March but is still manned by Ukrainian staff.

The Ukrainian command of the defences of Zaporizhzhia also reported explosions in Enerhodar. It said Russian troops were responsible but did not give details.

“Since five o’clock in the morning, constant mortar shelling of the town … Bursts from automatic weapons could be heard,” the mayor of Enerhodar, Dmytro Orlov, wrote on Telegram.

“There are casualties,” he added.

Zaporizhzhia authorities had earlier conducted emergency drills in case of a radiation leak.

A video released by the regional administration showed workers in protective suits and breathing masks using radiation detecting devices on cars and people.

The IAEA mission to the plant is a step toward “deoccupying and demilitarising” it, Ukraine’s energy minister, German Galushchenko, has said, though Russia has said it has no intention of withdrawing its forces for now.

Ukraine says Russia has been using the plant as a shield to hit towns, knowing it will be hard for Ukraine to return fire. It has also accused Russian forces of shelling the plant.

Russia denies that and says radiation levels at the plant are normal. It also accuses Ukrainians of targeting the plant to try to generate outrage in hopes it will result in a demilitarized zone.

Grossi said such a status was a political matter for the countries in conflict.

Russia had said it welcomed the IAEA’s stated intention to set up a permanent mission at the plant, but the head of the Russian-installed administration in the area told Interfax the inspectors “must see the work of the station in one day”.