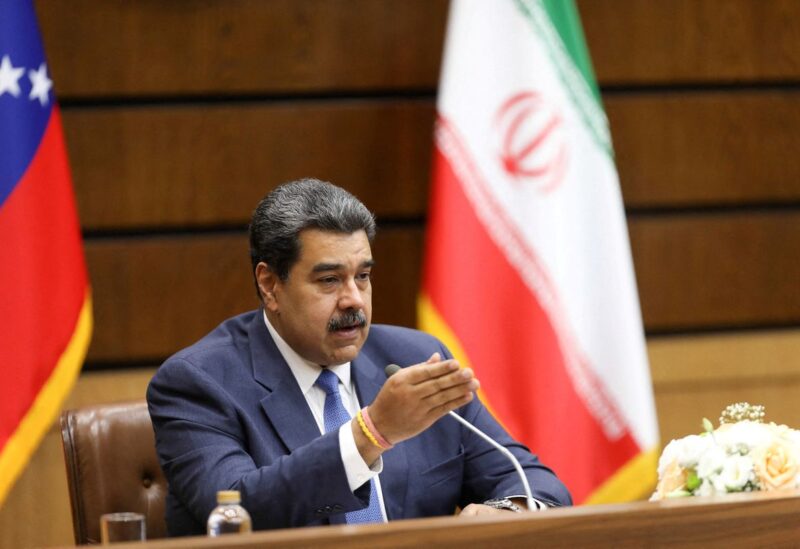 Venezuelan President Nicolas Maduro speaks during a meeting with Iranian President Ebrahim Raisi (not pictured) after Iran delivered to Venezuela the second of four Aframax-sized oil tankers, with a capacity of 800,000 barrels, ordered from the Iranian company SADRA, in Tehran, Iran, June 12, 2022. Miraflores Palace/Handout via REUTERS

President Joe Biden’s lead hostage negotiator led a U.S. delegation on a trip to Caracas on Monday in the most recent attempt to obtain the release of Americans jailed in Venezuela, according to a U.S. official and other individuals familiar with the situation.

Two imprisoned Americans were released after a March visit by Roger Carstens, the special envoy of the United States for hostage problems, and other top American officials. Still, there are at least eight American detainees.

Venezuelan President Nicolas Maduro disclosed Monday’s visit during televised remarks, saying U.S. officials met with the head of the government-controlled congress, Jorge Rodriguez, to continue talks that began in March. He did not provide details.

Sources familiar with the matter said the agenda for Monday’s talks was limited to humanitarian issues and did not include the OPEC nation’s oil sector, which has been under U.S. sanctions since 2019. The meetings included Ambassador James Story, head of the U.S. government’s Venezuelan Affairs Unit based in neighboring Colombia.

In March, a high-level delegation from the United States met with Maduro, and easing U.S. sanctions was among the topics discussed, although no agreement was reached at the time.

That visit marked the highest-level U.S. talks with Caracas in years, and Venezuela soon freed a former executive of Citgo Petroleum, a U.S.-based unit of Venezuela’s state oil company PDVSA, and a Cuban American and also promised to resume talks in Mexico with the Venezuelan opposition.

Maduro has yet to agree on a date to return to the negotiating table.

Five other Citgo executives are still held in Venezuela.

Also in custody is Matthew Heath, a Marine veteran arrested in 2020 on charges of terrorism and arms trafficking. Heath, who has denied the charges, remains in a Venezuelan hospital after what his lawyer said was an attempted suicide by cutting his own arm last week.

“After he attempted suicide, Matthew’s family made a plea to Presidents Biden and Maduro to act decisively to arrange an emergency medical evacuation to the United States so that Matthew can get the specialized care he needs,” Jonathan Franks, spokesperson for Heath’s family, said in a statement.

U.S. officials said Heath was not sent by Washington and have accused Venezuelan authorities of holding him illegally.

Two other Americans still detained are former U.S. special forces members, Luke Denman and Airan Berry, who were arrested in 2020 in connection with a botched raid aimed at ousting Maduro.

A U.S. State Department spokesperson said the latest Caracas visit was “for discussions about the welfare and safety of U.S. nationals in Venezuela.”

A U.S. government source, speaking on condition of anonymity, said the main objective was to seek further prisoner releases.

The State Department official did not immediately respond to a query on whether any Americans were expected to be freed during the visit.

March’s delegation was led by Biden’s top Latin America adviser Juan Gonzalez, and also included Carstens and Story, U.S. ambassador to Venezuela who is based in Bogota.

That meeting took place at a time when Washington was looking to fill the void that would soon be left by a U.S. ban on Russia’s energy imports over its invasion of Ukraine.

Since the March visit, the Biden administration has taken a few steps to slightly soften its Venezuela policy.

Republican lawmakers and some of Biden’s fellow Democrats have criticized the U.S. approach to Venezuela as too conciliatory toward Maduro and his Socialist government.