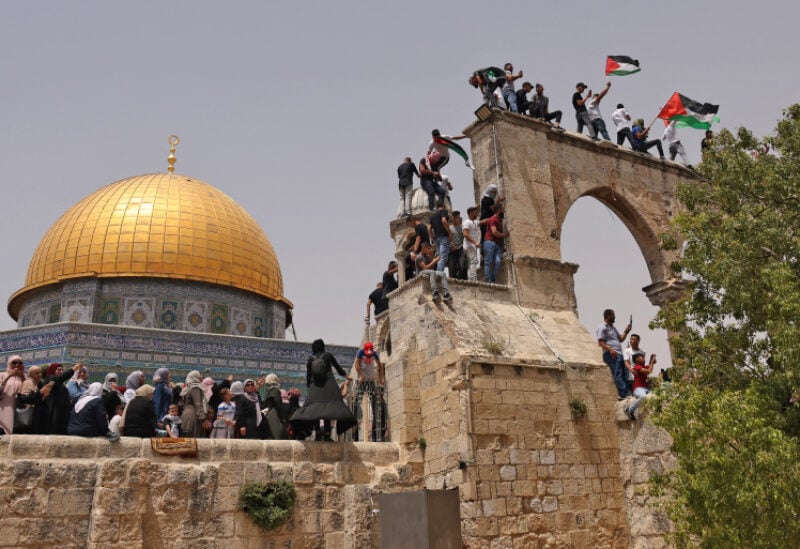 Sheikh Abdullah bin Zayed Al Nahyan, the foreign affairs minister of the United Arab Emirates, and his Jordanian colleague, Ayman al-Safadi, have denounced the most recent events at the al-Aqsa Mosque compound in Jerusalem as a “violation of international law.”

But the move angered Palestinians and drew criticism from a number of sides including the UAE and Saudi Arabia, while Palestinian Prime Minister Mohammad Shtayyeh said the visit to the compound came as a bid to turn the mosque into a “Jewish temple.”

“They emphasized the need to further promote the efforts aimed at achieving a just, comprehensive, and lasting peace based on the two-state solution and the establishment of an independent Palestinian state on the 1967 borders with East Jerusalem as its capital, underscoring the need to stop all illegal Israeli measures that undermine the two-state solution,” it said.

The pair also stressed the need to stop all Israeli violations of al-Aqsa Mosque, calling on Israel to respect the existing historical and legal status quo, and to not compromise the authority of the Jerusalem Endowment Administration and al-Aqsa Mosque.

Sheikh Abdullah bin Zayed underscored the need to respect the role of the Hashemite Kingdom of Jordan in caring for the sanctities and endowments in accordance with the international law and the existing historical status quo.

Al-Safadi affirmed that Jordan will continue to devote all its capabilities to protect the holy sites and ensure respect for the existing historical and legal status quo therein, warning of the seriousness of the Israeli violations of al-Aqsa Mosque.

After Tuesday’s controversial visit, video footage showed Ben-Gvir strolling at the periphery of the compound, surrounded by a heavy security detail.

“The Temple Mount is open to all,” he said on Twitter, using the Jewish name for the site.

The visit has risked increasing frictions with Palestinians after a surge of violence in the Israeli-occupied West Bank in 2022.

Diplomats said both the UAE and China asked the UN Security Council to meet publicly to discuss the issue, likely on Thursday.

UN Secretary-General Antonio Guterres “calls on all to refrain from steps that could escalate tensions in and around the holy sites,” UN deputy spokesman Farhan Haq said.

In an apparent effort to lower the temperature, an official in Israeli Prime Minister Benjamin Netanyahu’s office said the premier was fully committed to the site’s decades-old status quo allowing only Muslim worship there.