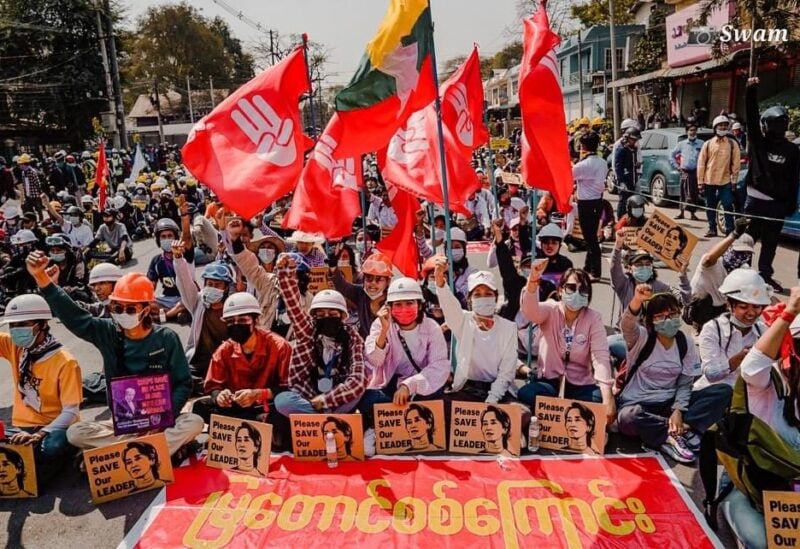 Myanmar has been embroiled in unrest since the military toppled the elected government and installed a junta in early February. The United States, the UK, and the European Union have since condemned the actions and introduced economic restrictions on the country’s new ruling officials.

UK Prime Minister Boris Johnson called for an “immediate end to military repression” in Myanmar on Thursday, amid increasing levels of instability in the country.

Writing on Twitter, Johnson said he was “horrified by the escalation of violence in Myanmar and the killing of pro-democracy protesters”.

“We stand with the people of Myanmar in calling for an immediate end to military repression, the release of Aung San Suu Kyi and others, and the restoration of democracy,” Johnson said.

​His comments follow the deaths of dozens of people during demonstrations against the coup government that took power on 1 February.

Over 50 people have been killed in protests in Myanmar since the military took power. Of the 54 recorded, at least 30 people lost their lives in Yangon, Mandalay, Sagaing, Magway, and Mon at the hands of security forces on Wednesday, UN sources claim.

Britain has introduced a number of sanctions on top generals in the Myanmar army over their involvement in the coup which toppled the democratically elected government.

Some South East Asian countries, however, have rebuked the sanctions policy being pursued by Western powers.

Singapore Prime Minister Lee Hsien Loong told the BBC on Tuesday that sanctions would be counter-productive, only serving to harm the population of Myanmar and push the government towards other trading partners such as China.

“You can ostracize them, condemn them, and pass resolutions or not, but it really has very little influence,” Mr Lee told the BBC, according to comments distributed by his office.

“We have to express disapproval for what is done, which is against the values of many other countries, and in fact a large part of humanity. But to say that I will take action against them, where does this lead?”

On February 10th, US President Joe Biden announced sanctions on Myanmar military leaders as well as those involved in armed forces-linked business operations.

Following the coup on 1 February, the armed forces declared martial law introduced a nightly curfew as well as a ban on gatherings of more than five people.

​However, large protests emerged in response to the forced change in power and a mass civil disobedience campaign remains ongoing.

​The military seized power just hours before the new parliament was set to return after the November elections, where Aung San Suu Kyi’s National League for Democracy (NLD) won a massive victory.

According to the military, they were responding to “election fraud” that took place during the national poll.