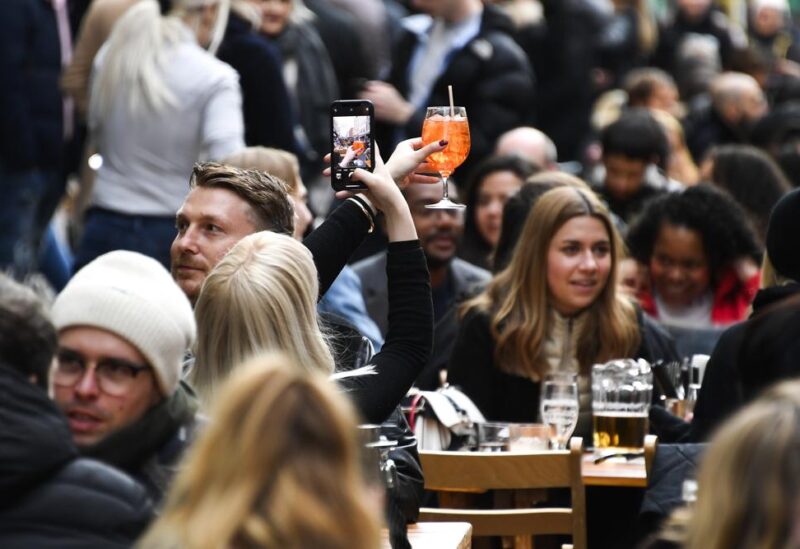 A woman takes a photo on her phone of her drink in Soho, London, as some of England's coronavirus lockdown restrictions were eased by the government. Thanks to an efficient vaccine roll out program and high uptake rates, Britain is finally saying goodbye to months of tough lockdown restrictions. From Monday May 17, 2021, all restaurants and bars can fully reopen, as can hotels, cinemas, theatres and museums, and for the first time since March 2020, Britons can hug friends and family and meet up inside other people’s houses. (AP Photo/Alberto Pezzali, File)

LONDON: When London’s Science Museum reopens next week, it will have some new artifacts: empty vaccine vials, testing kits and other items collected during the pandemic, to be featured in a new COVID-19 exhibition.

Britain isn’t quite ready to consign the coronavirus to a museum — the outbreak is far from over here. But there is a definite feeling that the U.K. has turned a corner, and the mood in the country is jubilant. “The end is in sight,” one newspaper front page claimed recently. “Free at last!” read another.

Thanks to an efficient vaccine rollout program, Britain is finally saying goodbye to months of tough lockdown restrictions.

Starting Monday, all restaurants and bars in England can fully reopen, as can hotels, theaters and museums. And Britons will be able to hug friends and family again in public, with the easing of social distancing rules that have been in place since the pandemic began.

It’s the biggest step yet to reopen the country following an easing of the crisis blamed for nearly 128,000 deaths, the highest reported COVID-19 toll in Europe.

Deaths in Britain have come down to single digits in recent days. It’s a far cry from January, when up to 1,477 deaths a day were recorded amid a brutal second wave driven by a more infectious variant first found in Kent, in southeastern England.

New cases have plummeted to an average of around 2,000 a day, compared with nearly 70,000 a day during the winter.

Since then, British health officials have raced to get ahead of the virus by vaccinating hundreds of thousands of people a day at hospitals, soccer pitches, churches and a racecourse. As of this week, about 35.7 million people — or approximately 68% of the adult population — have received their first dose. Over 18 million have had both doses.

It’s an impressive feat, and many credit Britain’s universal public health system for much of the success.

Experts say the National Health Service, one of the country’s most revered institutions, is able to target the whole population and easily identify those most at risk because almost everyone is registered with a local, state-employed general practitioner.

That infrastructure, combined with the government’s early start in securing vaccine doses, was key. British authorities began ordering millions of doses from multiple manufacturers late last spring, striking deals months ahead of the European Union and securing more than enough vaccine to inoculate the entire population.

“I don’t think it’s surprising that the two countries in the world with probably the strongest primary care systems, which are us and Israel, are doing the best with vaccine rollout,” said Beccy Baird, a policy researcher at the King’s Fund, a charity for improving health care.

“We have the medical records. We can understand where our patients are. We’re not trying to negotiate with loads of different insurance companies. … It’s the same standard right through the country,” she added. “Whereas in the States, it’s going to be harder to really think about how do you reach underserved communities, how do you get out there and provide the same access to everybody to this vaccine?”

David Salisbury, a former director of the government’s immunization program and a fellow at London’s Chatham House think tank, added that Britain also has the edge because of its track record in successfully rolling out other vaccines, such as the seasonal flu shot.

Many around the world were skeptical about Britain’s decision to delay the second dose by up to 12 weeks to free up vaccine for more people, but that strategy also paid huge dividends. The two shots of the Pfizer and Moderna vaccines were intended to be given three and four weeks apart.

Anthony Harnden, an Oxford academic and a top government vaccination adviser, said “there were lots of questions asked” and “we were up against many countries” who disagreed with spacing out the two doses, but officials stuck to the plan.

“You have to remember, looking back at that time, there were a thousand or more people dying every day in the U.K. So there was a huge imperative to get our vulnerable people vaccinated,” he said. “It was an innovative strategy, a bold strategy, but it was based on our experience of previous vaccines.”

The vaccine program’s success has been a much-needed boost for Britain.

Many of those who accuse the government of poorly managing the outbreak last year say the U.K. is finally doing something right.

“We didn’t hand (the vaccine rollout) over to an outsourcing company. That would have been a major failure. And we also didn’t delay the way we did in the first wave. We moved quickly,” said Martin McKee, a professor of European public health at the London School of Hygiene and Tropical Medicine. “So it was almost like the mirror image of the mistakes we made in the first wave.”

Still, McKee said he is worried that too many people may throw caution to the wind too soon.

Young people, who run a much lower risk of serious illness but can still spread the virus, are not included in the vaccination program. Official figures also show significant gaps in vaccine uptake among minorities and poor people.

McKee and many others are also concerned about the variants of the virus that are turning up. That risk is especially worrying as the U.K. slowly reopens to foreign tourists this summer.

“We’ve seen very discouraging evidence from Chile and from the Seychelles, both of which have high proportions of people who have been vaccinated and where many restrictions were lifted, and they’ve had upsurges,” McKee said.

Harnden is more optimistic. If the U.K. can roll out a booster vaccine program later this year and if people remain cautious, he said, “we can get ourselves out of this” and get close to normal by the summer of 2022.

“We’re not completely out of this yet,” he said, “but we’re in a much, much better place than in the last few months.” – Associated Press