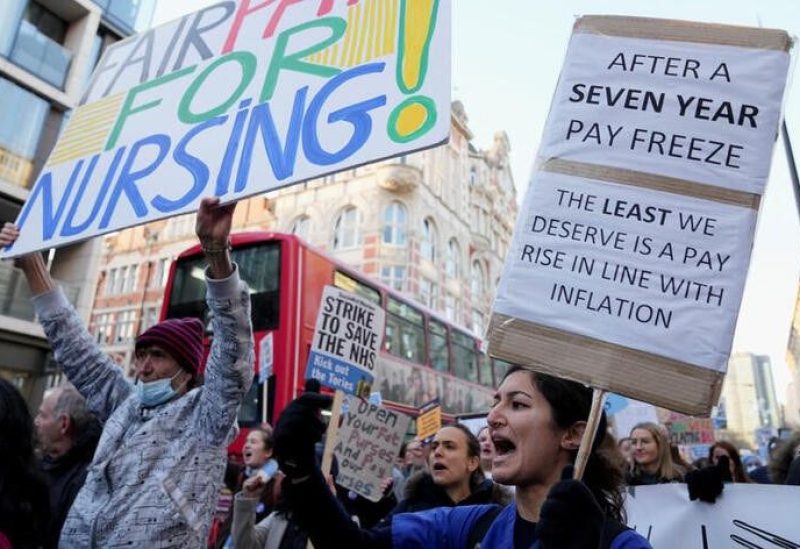 NHS nurses march during a strike, amid a dispute with the government over pay, in London, Britain, December 20, 2022. REUTERS

Teachers in England and Wales indicated on Monday that they would participate in industrial action, joining nurses, train workers, and other groups in doing so, causing Prime Minister Rishi Sunak’s administration much more trouble.

On February 1, when 100,000 public sector workers are scheduled to strike, the National Education Union (NEU) announced that the first strike would take place. This could be the largest day of coordinated industrial action in Britain in many years.

In all, 23,400 schools in England and Wales will be impacted by the school strikes. Teachers in Scotland have already held strikes which have closed many schools.

Sunak is coming under increasing pressure to try to resolve pay disputes with hundreds of thousands of workers following months of strikes which have caused widespread disruption.

With inflation running at more than 10%, workers from multiple sectors are demanding higher wages.

The government has said it cannot afford big wage rises and warned that any big boost to salaries would exacerbate the inflation problem.

Education minister Gillian Keegan said it was “deeply disappointing” that the NEU had voted to strike.

“Talks with union leaders are ongoing and any strike action from one union will have a damaging impact on pupils’ education and wellbeing,” she said in a statement.

Some 90% of the NEU teachers voted to strike in England on a turnout of 53%, the union said, meeting the legal turnout threshold for action to proceed. In Wales, 92% voted yes to action, on a 58% turnout.

Last week, a strike ballot by a different teachers’ union in England fell short of the required turnout threshold. On Monday a separate union for headteachers said it was considering re-running a ballot on industrial action after it also missed the threshold for strike action, possibly due to postal disruption.

Teachers in England last held a strike in 2016 but the majority of schools remained open. A larger scale walkout by teachers took place in 2008.

The strikes will take place over seven days in February and March, though any individual school will only be affected by four of them, the union said.