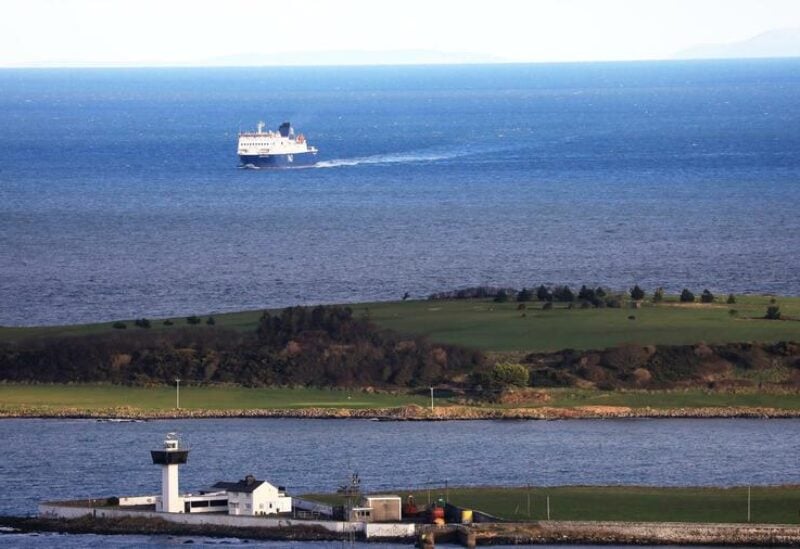 A P&O ferry from Scotland crosses the Irish Sea towards the port at Larne on the north coast of Northern Ireland. Photograph: Peter Morrison/AP

In a move that is likely to irritate the EU but won’t lead to further action, the UK has unilaterally decided to keep suspending border checks on farm products and other goods entering Northern Ireland from Great Britain.

In its formal response to seven lawsuits filed by the EU over the alleged noncompliance of the UK with the Northern Ireland protocol, London informed Brussels of its choice on Thursday.

The UK will also request that a full specialised committee on EU programmes, the official forum for Brexit implementation issues, takes place next week to discuss the ongoing exclusion of Britain from the flagship Horizon Europe science funds.

This could be read as a sign that further action will be announced next week with the potential for article 16 to be triggered, or an announcement that the UK is ready formally to re-enter talks.

A European commission spokesman said it needed time to consider the response. “We have received a reply from the UK. We will now analyse the reply before deciding on the next steps,” he said.

Source say it is more likely to centre on discussions about the UK’s continued exclusion from the EU’s flagship Horizon Europe science research fund.

EU and Irish leaders hope the chance for the rift to be healed will be seized after the powerful reminders this week of the Queen’s role in reconciliation in Ireland and before a potential meeting between the UK prime minister, Liz Truss, and US president, Joe Biden, next week.

Downing Street is not making any statement on the matter as political business remains in abeyance during the 10-day period of mourning for the Queen.

The UK believes the continuation of the grace period for checks on goods will create the space needed for solutions to the protracted row with Brussels.

It will mean farm produce including sausages, ready meals and dairy products from Great Britain can continue to be delivered to shops in Northern Ireland without physical checks that they comply with EU standards.

The UK argues it is a necessary move to preserve business stability as well as fulfil a promise to the unionist political parties, which object to the protocol. Brussels is not expected to respond until it has fully assessed the UK’s response.

The EU has been bracing itself for another bruising battle with the UK over the Northern Ireland protocol after Truss’s decision in June to table a bill for new laws that would enable the UK to scrap parts of the protocol completely, which legal experts say would mean breaking international law.

The lack of political rhetoric, occasioned by the death of the Queen, could avert a difficult meeting with Biden on the sidelines of next week’s funeral and in a potential bilateral with Liz Truss in the US next week.

The letter to the EU comes two months after the European Commission launched four infringement proceedings, accusing London of failing to comply with the application of the customs checks and risk controls on the movement of goods into Northern Ireland. It also accused the UK of failing to implement VAT rules or to follow the notification procedures on alcohol duties.

Brussels is now expected to push ahead with the legal process but, like the UK, will pursue a twin-track approach aimed at finding a negotiated solution.