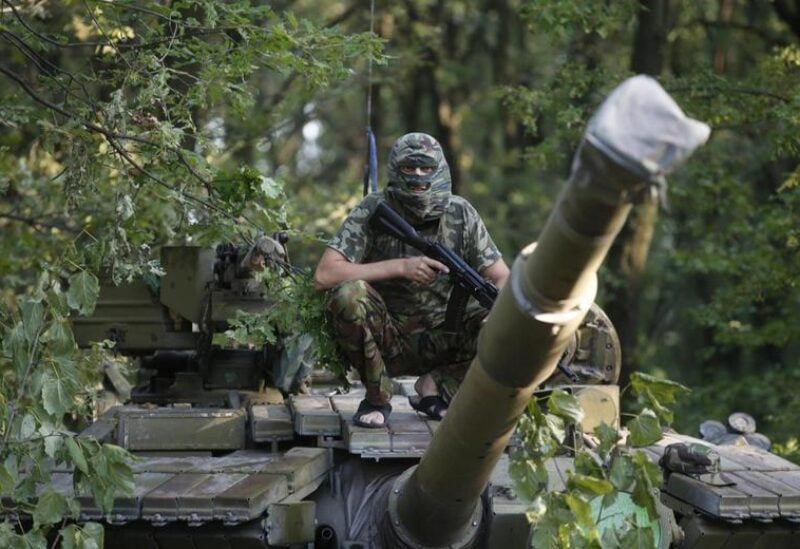 FILE PHOTO: A pro-Russian separatist from the Vostok (East) battalion poses for a picture atop a T-64 tank in Donetsk, eastern Ukraine, July 16, 2014.

the United States declared that Russia has been building its forces along the border, amid diplomatic efforts to bring the Ukraine crisis to an end.

“We have continued to see even over the last 24 hours additional capabilities flow from elsewhere in Russia to that border with Ukraine and Belarus,” the Pentagon said.
The Pentagon said the “numbers continue to grow” referring to the Russian troop deployment.
“We also see indications that additional battalion tactical groups are on their way,” Pentagon spokesman John Kirby said, adding,”Every day he adds to his options. Every day he adds to his capabilities,” Kirby added pointing at President Putin.

Meanwhile, Russia is set to launch its military exercise in Belarus. NATO chief Jens Stoltenberg had said there would be at least 30,000 troops including Spetsnaz special operations forces, fighter jets and deployment of S-400 air defence system.

The White House called the military exercise was “escalatory and not a de-escalatory action” amid tensions with Ukraine.
“I wouldn’t make a prediction as to what it means in terms of an invasion,” White House spokesperson Jen Psaki said.

Earlier, President Macron had met Ukraine President Volodymyr Zelensky and Putin in a bid to find a solution to the ongoing crisis. Macron informed President Biden about the meeting.

German Chancellor Olaf Scholz is set to visit Ukraine and Russia as diplomatic efforts continue to diffuse the Ukraine crisis after Russia deployed over 100,000 troops at the border with Ukraine.

Last month Kremlin had submitted a security document to the US and NATO directing it not to induct ex-Soviet states into its military alliance referring to Ukraine, however, the move was rejected both by the White House and NATO. wions