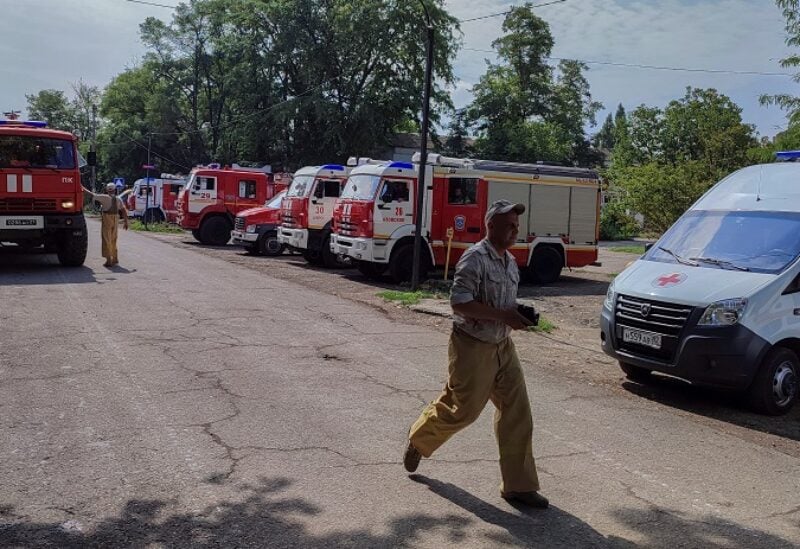 Firefighting and ambulance vehicles are parked in Azovskoye (Azovske) settlement following an explosion at a Russian military warehouse in the Dzhankoi district, Crimea, August 16, 2022. REUTERS/Stringer

Russia claimed more Ukrainian drone attacks were launched on military sites in Russia and in Ukrainian territory that was under Russian control, on Friday night, seemingly demonstrating Kyiv’s growing capacity to batter Moscow’s assets far from the front lines.

The most recent events came after big explosions at an air base in Crimea that Russia had occupied last week. According to a recent assessment by a Western official, that incident instantly rendered worthless half of Russia’s Black Sea naval aviation force.
According to a local official in Crimea quoted by Russia’s RIA and Tass news agencies, it appeared Russian anti-aircraft units were in action on Friday night close to the western Crimean port of Yevpatoriya. A Russian website published a video of what seemed to be a ground-to-air missile striking a target. Reuters was unable to immediately verify the accuracy of the video.

Six Ukrainian drones sent to assault the settlement of Nova Kakhovka, east of the city of Kherson, were shot down by Russian anti-aircraft forces. Retaking Kherson is one of Ukraine’s top goals, the country claims. Separately, a Crimean official reported that undetermined numbers of drones had been shot down by the region’s defences over Sevastopol, as per a local official quoted by the Tass news agency.
Seriy Khlan, a member of the regional council for Kherson that was abolished by Russian occupation forces, remarked that “the Ukrainian armed forces treated the Russians to a magical evening.”

The previous evening, numerous explosions in Crimea, which Moscow annexed in 2014, had been reported, including ones in Sevastopol, the base of the Russian Black Sea Fleet, and at Kerch, close to a huge bridge to Russia.

A frontline nuclear power plant, the Zaporizhzhia complex, was also the subject of dire threats from Ukraine, which claimed that Moscow was plotting a “large-scale provocation” to use as an excuse to disconnect the plant from the Ukrainian power grid and connect it to Russia’s.