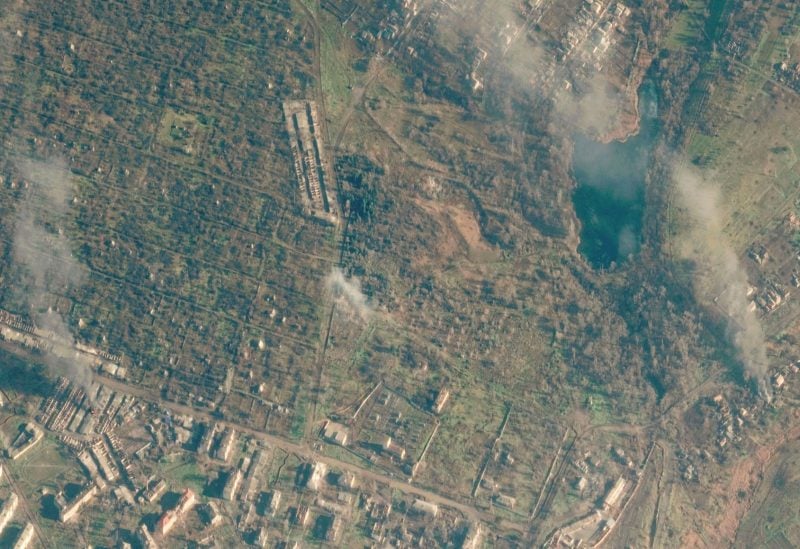 A satellite view shows a smoldering building, in Soledar, Ukraine, January 3, 2023. Satellite image 2023 Maxar Technologies./Handout via REUTERS ATTENTION EDITORS - THIS IMAGE HAS BEEN SUPPLIED BY A THIRD PARTY. MANDATORY CREDIT. NO RESALES. NO ARCHIVES. DO NOT OBSCURE LOGO.

Over 500 residents, including children, were besieged in the eastern salt mine town of Soledar, where Ukraine claimed its troops were fending off pro-Moscow rebels.

Volodymyr Zelenskiy, the president of Ukraine, commended two battalions in Soledar on Thursday for “maintaining their positions and inflicting considerable losses on the enemy” in a video message. No other information was provided by him.

Zelenskiy said he and senior Ukrainian commanders analysed the need for reinforcements in Soledar and nearby towns in the eastern industrial area known as the Donbas and next steps for the coming days.

Russia’s ultra-nationalist contract militia Wagner Group, run by an ally of President Vladimir Putin, claimed to have taken Soledar after intense fighting that it said left the town strewn with Ukrainian dead.

Moscow however, has held off officially proclaiming a victory, which would be its first significant gain in six months.

“At the moment, there are still some small pockets of resistance in Soledar,” Andrei Bayevsky, a Russian-installed local politician, said in an online broadcast.

Reuters was unable to independently verify the situation.

Donetsk governor Pavlo Kyrylenko told Ukrainian state TV that 559 civilians remained in Soledar, including 15 children, and could not be evacuated from the community that had a pre-war population of about 10,000.

A 24-year-old Ukrainian soldier, positioned outside Soledar, said: “The situation is difficult but stable. We’re holding back the enemy … we’re fighting back.”

U.S. officials questioned the importance of a Russian victory in Soledar even if that were true.

Soledar lies less than 10 km (6 miles) northeast of the city of Bakhmut where fighting has raged for months in one of the war’s bloodiest battles – dubbed the “meat grinder”.

“Even if both Bakhmut and Soledar fall to the Russians, it’s not going to have a strategic impact on the war itself,” U.S. National Security Council spokesman John Kirby told reporters at the White House, “and it certainly isn’t going to stop the Ukrainians or slow them down.”

Oleksandr Kovalenko, an analyst at Ukraine’s Information Resistance Military-political group, said the battle for Soledar had eased the pressure on the more strategic town of Bakhmut.

“Soledar has already fulfilled its main role — drawing off

a large amount of Russian resources and destroying them.” he said on the nv.ua media website.

Kovalenko said Soledar’s cavernous salt mines could prove lucrative for Russia, if its forces succeeded in taking the town.

He said Ukrainian forces controlled the southwest and centre of Soledar, but warned that “maintaining that control comes at a cost of human lives”.

The reports of alleged torture by pro-Moscow forces include electric shocks to genitals and other parts of the body, beatings, various forms of suffocation and sexual violence.

Moscow says it is conducting a “special military operation” in Ukraine to protect the security of Russia and denies committing war crimes or targeting civilians. Moscow in turn accuses Ukraine of war crimes and the West of ignoring them.

The United Nations in November said it had found evidence that both sides had tortured prisoners of war.

Kremlin-watchers were examining Russia’s latest switch of battlefield leadership, a day after Valery Gerasimov, chief of the military’s general staff, was unexpectedly given direct command of the invasion.

Moscow explained the decision – at least the third abrupt change of top commander in the 11-month conflict – as a response to the campaign’s growing importance.

Across Ukraine, the front lines have barely budged since Russia’s last big retreat in the south two months ago. Kyiv hopes heavy armour from Western allies will allow it to resume advances.

Putin launched the invasion on Feb. 24, saying Kyiv’s ties with the West threatened Russia’s security. Ukraine and its allies call it an unprovoked war to seize territory.