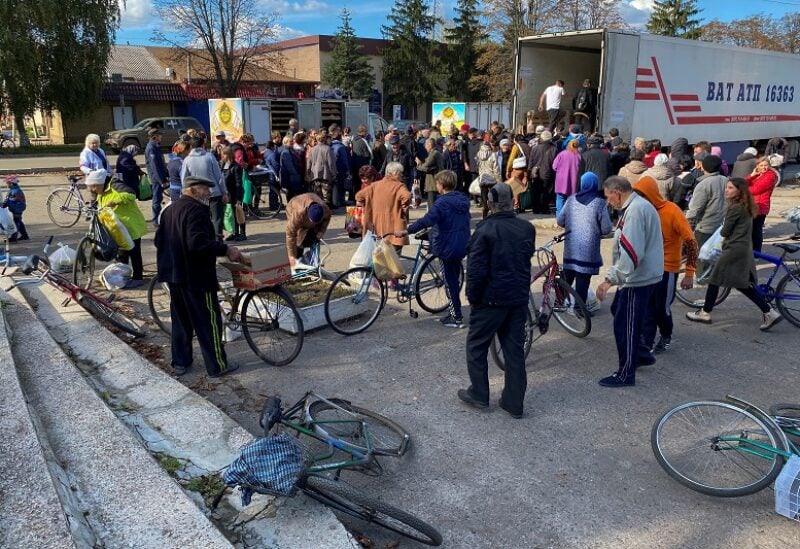 Local residents receive food and a humanitarian aid in the settlement of Borova, recently retaken by the Ukrainian Armed Forces, amid Russia's attack on Ukraine, in Kharkiv region, Ukraine October 7, 2022. REUTERS/Vitalii Hnidyi

While Kyiv goes forward with its counteroffensive despite mass Russian missile strikes that hit the country in the past days, Ukraine said Wednesday it had retaken five more settlements in the southern region of Kherson.
“Ukrainian armed forces have liberated five more settlements in Beryslav district (of Kherson region): Novovasylivka, Novogrygorivka, Nova Kamyanka, Tryfonivka, Chervone,” the presidency said in its daily report.
“The enemy continues shelling the positions of our units to deter the counteroffensive along the entire contact line,” the presidency said.
The Ukrainian army announced its counteroffensive in the south in late August.
After regaining almost full control of the northeastern region of Kharkiv, the Ukrainian forces recently claimed more gains on the eastern and southern fronts.
On Thursday, Ukraine said it had recaptured over 400 square kilometers (155 square miles) in Kherson in less than a week, after Moscow claimed to have annexed the region.
Kherson is one of the four regions in Ukraine that Moscow recently claimed to have annexed.