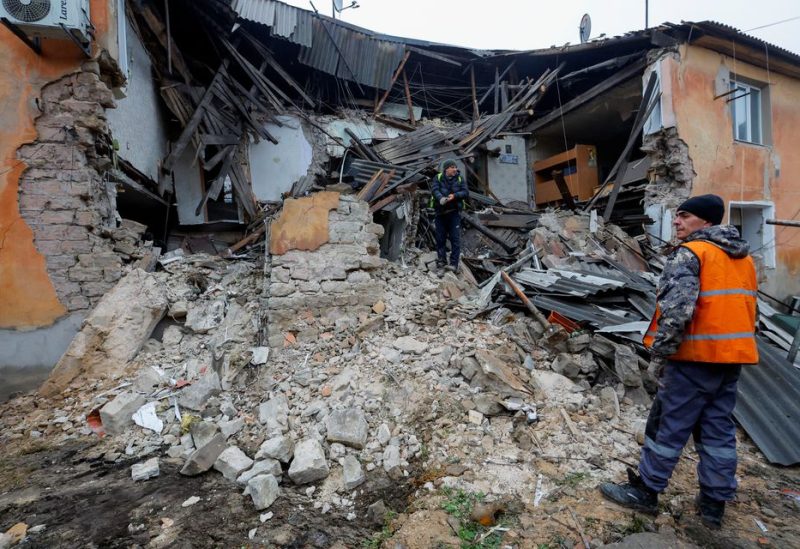 Workers remove debris of a residential building heavily damaged in recent shelling in the course of Russia-Ukraine conflict in Horlivka (Gorlovka) in the Donetsk region, Russian-controlled Ukraine, December 13, 2022. REUTERS/Alexander Ermochenko

After Russia ruled out a Christmas ceasefire in the almost 10-month-old war, Ukrainian forces shelled the Russian-controlled city of Donetsk in eastern Ukraine on Thursday, Moscow-installed officials reported.

The largest conflict in Europe since World War Two, which is mostly occurring in the east and south of Ukraine with little movement on either side, is not now being discussed by Moscow and Kyiv.

Alexei Kulemzin, the Russian-backed mayor of Donetsk, said 40 rockets had been fired from BM-21 Grad multiple rocket launchers at civilians in the city centre in the early hours.

Kulemzin said the attack was the biggest in Donetsk since 2014, when pro-Moscow separatists seized the city from Kyiv’s control, and cast it as a war crime. He did not say whether there were any casualties.

There was no immediate response to Kulemzin’s comments from Ukrainian officials.

Ukraine’s military General Staff said in its daily report that Moscow’s focus remained on the eastern cities of Bakhmut and Avdiivka, adding that Ukrainian forces had repelled Russian attacks in the past 24 hours.

It also said Russian forces continued to strike Ukrainian troops and civilian infrastructure in the Donetsk region and in the southern areas of Zaporizhzhia and Kherson.

Reuters was unable to immediately verify battlefield accounts from either side.

“There is no calm on the front line,” Ukraine’s President Volodymyr Zelenskiy said in a video address on Wednesday evening, describing Russia’s destruction of towns in the east with artillery “so that only bare ruins and craters” remain.

On Wednesday Kyiv suffered the first major drone attack in weeks. Two administrative buildings were hit, but air defences largely repelled the attack. Zelenskiy said 13 drones had been shot down.

‘I WANT THIS ALL TO BE OVER’

In one snowy Kyiv district, residents said they heard the loud whirring engine of an Iranian Shahed drone followed by a powerful explosion at a building next to their homes.

“I want this all to be over … For (Russian President Vladimir) Putin, that bastard, to die,” said Yana, 39, who had been getting ready for work when the attack took place.

Tens of thousands of people have been killed, millions more displaced and cities reduced to rubble since Russian forces entered Ukraine on Feb. 24 in a “special military operation”, saying it needed to protect Russian speakers from Ukrainian nationalists. Kyiv and its allies call it an unprovoked invasion.

Asked on Wednesday whether Moscow had seen proposals for a “Christmas ceasefire,” Kremlin spokesman Dmitry Peskov told reporters: “No, no such offers have been received from anybody. This topic is not on the agenda.”

Zelenskiy said this week that Russia should start withdrawing by Christmas as a step to end the conflict, but Moscow rejected the proposal, saying Ukraine must accept the loss of territory to Russia before any progress can be made.

White House national security spokesperson John Kirby said “it’s difficult to conclude that this war will be over by year’s end”, responding to a question about prospects for a negotiated peace.

In a move that would significantly bolster Ukraine’s air defence, U.S. officials told Reuters that a decision on providing the Patriot missile system to the Ukrainian military could be announced as soon as Thursday.

The Kremlin said the United States was getting “deeper and deeper into the conflict in the post-Soviet republic”, and that U.S. Patriot systems would be legitimate targets, something that Russia’s foreign ministry said on Thursday applied to all weapons supplied to Ukraine by the West.

Dmytro Lubinets, the Ukrainian parliament’s commissioner for human rights, said 12,000 Ukrainian children had been taken to Russia since the invasion began, including 8,600 by force.

He said Ukrainian investigators had uncovered a cell where Russian troops detained and mistreated children in Kherson, a southern city abandoned by pro-Moscow forces last month.

Lubinets did not provide evidence of his assertions and Reuters could not immediately confirm his account. Russia denies targeting civilians and rejects allegations of war crimes.

Despite the lack of peace talks, hundreds of detainees have been freed in swaps in recent weeks. The releases – along with progress on talks to resume Russian exports of an ingredient in fertiliser and the extension of a grains deal – have shown the two sides maintain at least limited contact on several levels.

The latest exchange of dozens of detainees included a U.S. citizen, Kyiv and Washington said on Wednesday.

The head of the International Committee of the Red Cross said on Wednesday an all-for-all prisoner of war swap deal was an option in the Ukraine-Russia conflict. The ICRC emphasised it was up to the two countries to reach an agreement on the issue.

Neither the Red Cross or the two sides have made public precise numbers for each country’s war detainees but there are believed to be thousands of such prisoners.