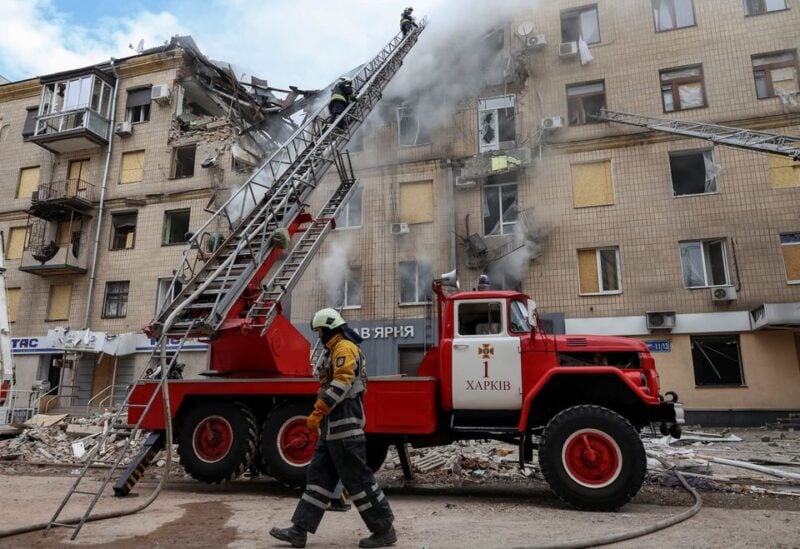 Firefighters work at the site of a residential building hit by a Russian military strike, amid Russia's attack on Ukraine, in Kharkiv, Ukraine September 6, 2022. REUTERS/Sofiia Gatilova/File Photo

As a collapse in Russia’s frontline threatened to turn into a rout, Ukrainian officials shared photos on Saturday of troops hoisting the national flag over the city housing the main railway hub supplying Russian forces in northeastern Ukraine.

Glory to the Ukrainian armed forces, wrote Natalia Popova, advisor to the head of the Kharkiv regional council, in a Facebook post that featured pictures of soldiers in front of the Kupiansk city hall.

The soldiers are seen holding up a Ukrainian flag with a Russian flag at their feet and Ukrainian flags flying from city hall behind them.

The city, where rail lines into eastern Ukraine converge on the trunk line from Russia, would be the most important prize yet in a stunning Ukrainian breakthrough this week, after Russia’s frontline crumbled near the city of Kharkiv.

The capture of Kupiansk potentially leaves thousands of Russian soldiers trapped at the frontline and cut off from supplies.

Ukraine has seized a huge swathe of territory in the east in recent days in the fastest advance since it defeated the Russian assault on the capital Kyiv in March.

In an overnight video address, President Volodymyr Zelenskiy said at least 30 settlements had been liberated in Kharkiv region.

“Our army, intelligence units and the security services are carrying out active engagements in several operational areas. They are doing so successfully,” he said in a video address.

Moscow has acknowledged that its frontline has buckled in Kharkiv but has said it is rushing extra troops to reinforce the area.

The head of the Russian-installed administration in the province’s occupied areas has described the advance as a Ukrainian victory and called for civilians to flee.

Ukraine has so far kept independent journalists away from the area, but officials have released a barrage of images of troops sweeping into previously Russian-held towns and being embraced by local residents who had been under Russian military occupation for six months.

The Ukrainian advance threatens to encircle thousands of Russian troops in Izium, the main Russian stronghold and logistics base in the northeast sector of the front.

Oleksiy Arestovych, an adviser to Ukraine’s presidential office, in a video posted on YouTube, said the Russians in Izium were almost isolated.

Citing what he described as reports from the front line, Arestovych said hundreds of Russians had died so far and several hundred more had been taken prisoner.

Reuters was not able to immediately verify reports describing the situation in Izium. The Russian-installed head of the Kharkiv occupation administration, Vitaliy Ganchev, included Izium among cities where he said civilians should evacuate.

Ukraine’s advance is by far its most rapid in months, after a long period in which the war had shifted into a relentless grind along entrenched front lines.

Ukraine’s attack in the east came as a surprise just a week after it announced the start of a long-awaited counter-attack to reclaim Russian-occupied territory hundreds of kilometres away at the opposite end of the front in Kherson in the south.

Less information has been made public about that operation but Kyiv has also claimed some successes there, cutting supply routes to thousands of Russian troops isolated on the west bank of the Dnipro River.

“We see success in Kherson now, we see some success in Kharkiv and so that is very, very encouraging,” U.S. Defense Secretary Lloyd Austin told a news conference in Prague on Thursday.

Tens of thousands of people have been killed, millions have been driven from their homes and Russian forces have destroyed entire cities since launching what Moscow calls a “special military operation” to “disarm” Ukraine. Russia denies intentionally targeting civilians.