Ukraine updates: US warns of possible Russian attack on infrastructure 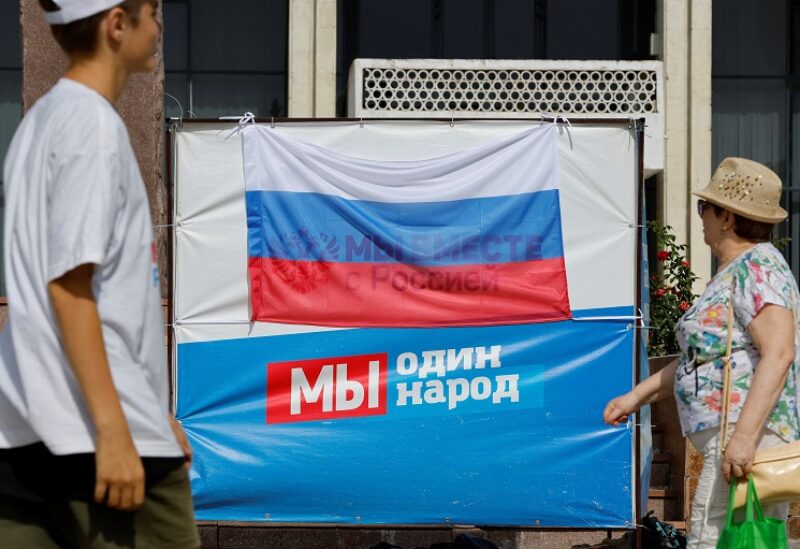 People walk past a banner reading "We are together with Russia. We are one nation" in the course of Ukraine-Russia conflict in the Russian-controlled city of Enerhodar in Zaporizhzhia region, Ukraine August 22, 2022. REUTERS/Alexander Ermochenko

The executive responsible for the United States’ foreign policy said late on Monday, that Russia is planning to launch fresh attacks against Ukraine’s civilian infrastructure and government facilities, adding that the attacks would likely occur in the coming days while the country’s embassy in Kyiv urged Americans still in Ukraine to depart immediately.

“If you hear a loud explosion or if sirens are activated, immediately seek cover,” the State Department said in its alert. “If in a home or a building, go to the lowest level of the structure with the fewest exterior walls, windows, and openings; close any doors and sit near an interior wall, away from any windows or openings.”

It comes as Kyiv bans any upcoming festivities to mark Ukraine’s independence day, which falls on August 24, due to the heightened threat of an attack.

Over the weekend, Ukrainian President Volodymyr Zelenskyy warned that Moscow could try “something particularly ugly” in the run-up to Wednesday’s 31st anniversary of independence from the Soviet Union. The date would also mark half a year since Russia invaded.
Russia’s Federal Security Service (FSB) on Monday accused Ukraine’s secret services of killing Daria Dugina, the daughter of a Russian ultranationalist philosopher and writer Alexander Dugin, Russian news agencies reported.

Dugina was killed on Saturday evening when a suspected explosive device blew up the Toyota Land Cruiser she was driving on a highway about 40 kilometers (25 miles) outside Moscow, Russian investigators said. Ukraine has denied involvement.

In a statement, the FSB said the attack was carried out by a Ukrainian female born in 1979.

It said the woman and her teenage daughter had arrived in Russia in July and spent a month preparing the attack by renting an apartment in the same housing block and researching Dugina’s lifestyle.

The assailant had attended an event outside Moscow on Saturday evening that Dugina and her father were also at, before carrying out a “controlled explosion” of Dugina’s car, and fleeing Russia to Estonia, the FSB was quoted as saying.

There was no immediate response from Kyiv to the FSB statement.
Hours after Russian authorities accused Ukraine of killing Dugina on Monday, Russian Vladimir Putin bestowed a posthumous award on the deceased ultra-nationalist political activist.

Dugina was awarded the prestigious Order of Courage. The Kremlin said she was given the state award on account of her “courage and selflessness shown in the performance of professional duty.”
The United States on Monday rejected Ukraine’s call for a blanket visa ban on Russians, saying Washington does not want to block the pathways to refuge for Russia’s dissidents and others threatened by human rights abuses.

A State Department spokesperson said the Biden administration has already imposed visa restrictions for Kremlin officials, but it made it clear that its focus would be on identifying those involved in Russia’s invasion of Ukraine and holding them accountable.

“The U.S. wouldn’t want to close off pathways to refuge and safety for Russia’s dissidents or others who are vulnerable to human rights abuses. We’ve also been clear that it is important to draw a line between the actions of the Russian government and its policies in Ukraine, and the people of Russia,” the spokesperson said.

Ukrainian President Volodymyr Zelenskyy had first urged the visa ban in an interview earlier this month with the Washington Post, saying Russians should “live in their own world until they change their philosophy.”

Some EU leaders such as Finnish Prime Minister Sanna Marin and her Estonian counterpart Kaja Kallas have also called for an EU-wide visa ban. German Chancellor Olaf Scholz, however, rejected the idea, saying Russians should be able to flee their homeland if they disagree with the regime.

German Chancellor Olaf Scholz sees his country as sharing responsibility for the reconstruction of Ukraine. This is “an important task where the world community has to set the right course in time,” he said at a meeting with Canada’s Prime Minister Justin Trudeau in Montreal.

Even now, during the war, the reconstruction of Ukraine must be on the agenda, Scholz added.

He also praised the cooperation with Canada in the dispute over a turbine for the Nord Stream 1 gas pipeline. “It was an important decision. Because it has exposed [Russian President Vladimir] Putin’s strategy aimed at dividing allies, aimed at undermining support for Ukraine,” Scholz said.

Russia is not a reliable business partner, said the Chancellor, as it has reduced gas supplies across Europe citing technical reasons that never existed.
At least 13,477 civilians have been injured or killed in Ukraine since Russian troops invaded the country in February, the UN said on Monday.

According to the UN Human Rights Office, the violence killed 5,587 people and injured 7,890 more. Among those killed were 362 children.

This information on the recorded civilian casualties relates to the period from the start of the Russian invasion on February 24 to August 21. The actual number of civilians killed and injured is likely to be much higher, UN Human Rights Office said.

According to the ministry, around 350,000 of the registered refugees are children and around 455,000 are adult women. 97 percent of the refugees are Ukrainian nationals.

However, the ministry warns that a significant number of the refugees may have returned or traveled to other countries. So, the officials cannot say exactly how many refugees from Ukraine are currently in Germany.