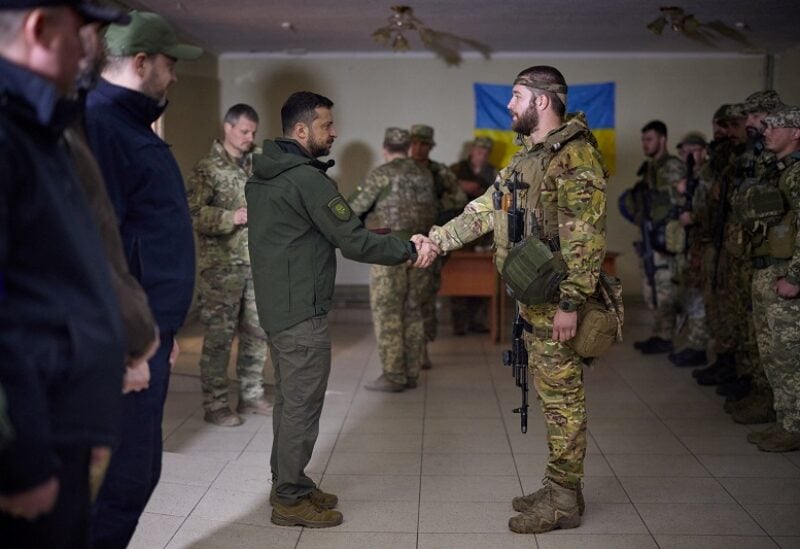 Ukraine's President Volodymyr Zelenskiy awards a Ukrainian service member, amid Russia's attack on Ukraine, near a frontline in Kharkiv region, Ukraine September 14, 2022. Ukrainian Presidential Press Service/Handout via REUTERS ATTENTION EDITORS - THIS IMAGE HAS BEEN SUPPLIED BY A THIRD PARTY.

Ukrainian President Volodymyr Zelensky’s spokesman Serhii Nykyforov said in a Facebook post early on Thursday, that the President did not receive “serious injuries” after his car was involved in a traffic accident in Kyiv.

Nykyforov said that Zelensky’s car collided with a private vehicle, but he did not reveal when the accident actually happened.

He mentioned that medics accompanying Zelensky attended to the driver of the private car. The driver was given emergency aid and the medics put him in an ambulance.
In a statement posted on Facebook at 1:22 am (local time), Nykyforov said, “In Kyiv, a passenger car collided with the car of the President of Ukraine and escort vehicles. Medics accompanying the President provided the driver of the passenger car with emergency aid and transferred him to an ambulance.”

“The president was examined by a doctor, no serious injuries were detected. The law enforcement officers will investigate all the circumstances of the accident,” he added.

On Wednesday, Zelensky made a surprise visit to Izyum in the Kharkiv region. During his visit to the strategic city, the Ukrainian president promised ‘victory’ in the ongoing Russia-Ukraine war.

The visit came at a crucial moment of the war, as Ukraine is expelling Russian forces from swathes of the east and seriously challenging the Kremlin’s ambition to capture the entire Donbas region.

Zelensky said in a statement on social media: “Our blue-yellow flag is already flying in de-occupied Izyum. And it will be so in every Ukrainian city and village. We are moving in only one direction — forward and towards victory.”