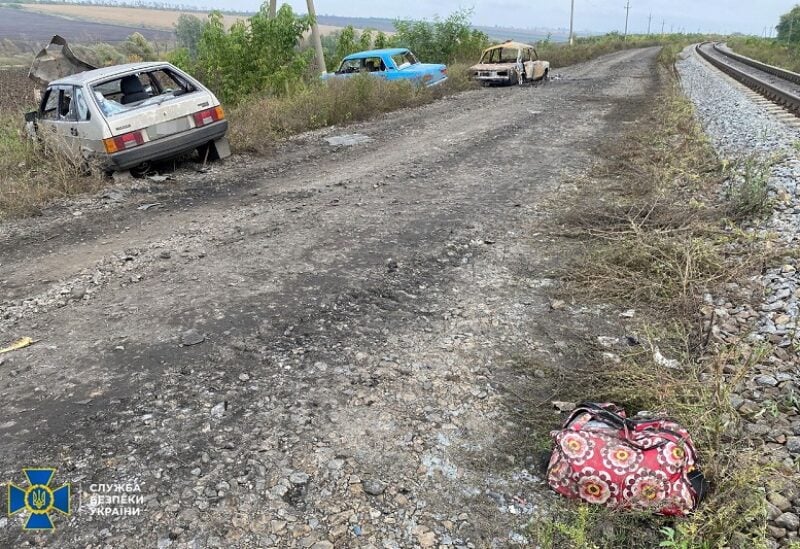 Cars from a civilian convoy, which Ukrainian State Security Service say was hit by a shelling of Russian troops amid Russia's attack on Ukraine, are seen between occupied Svatove town in Luhansk region and Ukrainian-held town of Kupiansk, in location given as Kharkiv region, Ukraine, in this handout picture released October 1, 2022. Press Service of the State Security Service of Ukraine/Handout via REUTERS ATTENTION EDITORS - THIS IMAGE HAS BEEN SUPPLIED BY A THIRD PARTY. DO NOT OBSCURE LOGO.

Russian suicide dronens reportedly attacked Ukrainian President Volodymyr Zelensky’s home town among other targets, The Sydney Morning Herald reported. His hometown of Krivyi Rih in southern Ukraine came under Russian attack by a suicide drone, leading to the destruction of two stories of a school early on Sunday, the regional governor said. The Ukrainian air force said five Iranian-made drones were shot down overnight, while two others made it through air defences.

Meanwhile, Ukraine took back full control of the strategic eastern city of Lyman in a major counteroffensive. Zelensky said on Sunday (October 2) that the success of the country’s soldiers is not limited to the recapture of Lyman as he said that some towns in the Kherson region have also been liberated.
According to Zelensky, the Ukrainian military has liberated the small settlements of Arkhanhelske and Myrolyubivka in the Kherson area. He thanked the army units for their “success” and also for distinguishing themselves on the frontline.

“[I am grateful] to the soldiers of the 129th brigade of my native Kryvyi Rih, who distinguished themselves with good results and liberated, in particular, Arkhanhelske and Myrolyubivka,” Zelensky said.

Meanwhile, the presidents of nine NATO countries have said they fully support “the decision of the 2008 Bucharest NATO Summit regarding the future membership of Ukraine in the Alliance.” These countries include Czech Republic, Estonia, Latvia, Lithuania, North Macedonia, Montenegro, Poland, Slovakia and Romania.