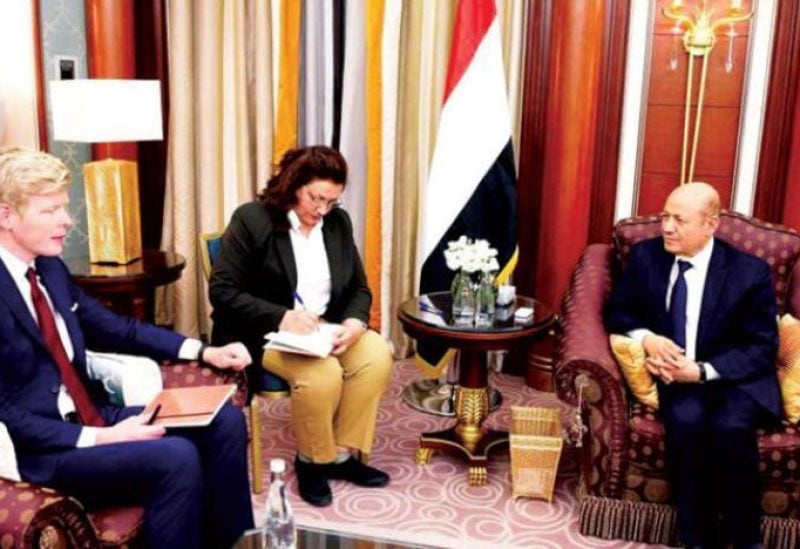 The Office of the Special Envoy of the Sec-Gen said Hans Grundberg concluded a visit to Riyadh, where he held constructive meetings with Saudi Ambassador to Yemen Mohammed Al Jaber and diplomats from the Security Council’s permanent members.

The discussions focused on options to renew the truce and work toward a political process in Yemen as a matter of urgency.

The Yemeni government and the Presidential Leadership Council approved Grundberg’s proposal to renew and expand the truce. However, the Iran-backed Houthis rejected the proposal, demanding more gains, which the Security Council described as “extremist demands.”

Earlier, Grundberg visited Oman and met with officials and the Houthi militia spokesman, Mohammad Abdulsalam Felita, without revealing the results of his discussions.

Yemeni observers fear that the UN envoy’s moves aim to extract new concessions from Yemen’s government and the Leadership Council, which recently decided to classify the Houthis as a terrorist group.

Despite the relative calm on the battlefronts, the UN accused the Houthis of committing war crimes, especially in Taiz, since the truce ended last month.

The Yemeni army’s military media confirmed that it repelled militia attacks and downed several drones in Shabwa and Marib.

Houthi leaders threaten to launch more attacks to prevent oil export from the ports on the Arabian Sea, while the Yemeni government asserts that it will protect the assets.

However, the Houthi militia responded to the Security Council’s statement condemning its attack on the Dhabba oil port in Hadramout by threatening to expand the attacks, saying that all options are open for a broader range of strict measures.

There are fears that the Houthi intransigence would reignite the clashes on various fronts after a relative calm throughout the six months of the truce that began on April 2. The militias refused to extend it for the third time on October 2.

The Yemeni government welcomed the recent Security Council condemnation, pointing to “the urgent need to deter the Houthi militias and their actions that threaten regional and international peace and security.”

Meanwhile, the Saudi Project for Landmine Clearance in Yemen (Masam) reported that during the first week of November, it dismantled 1,119 mines planted by the militias in various regions of Yemen, including six anti-mines personnel, 286 anti-tank mines, 816 unexploded ordnance, and 11 explosive devices.

A total of 371,236 mines have been cleared since the beginning of the project.