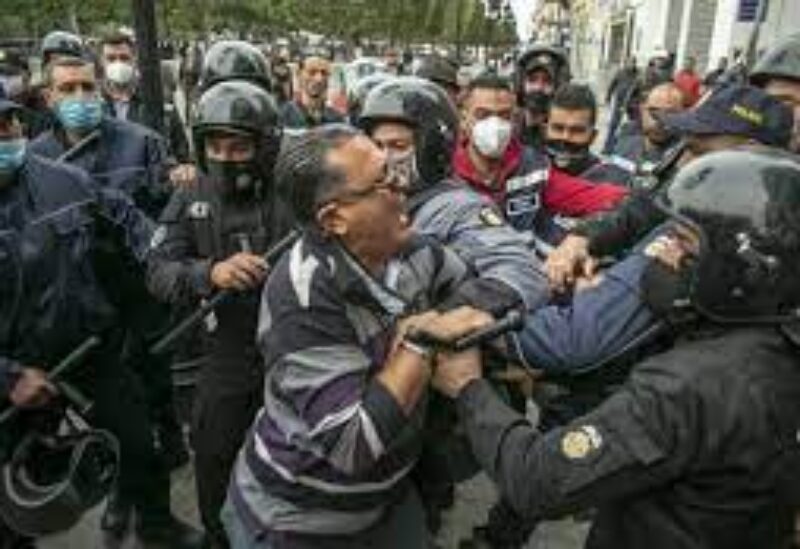 A video showing Tunisian police stripping and beating a young man triggered widespread anger and prompted criticism from political parties, local human rights organizations.  The United Nations human rights office in Tunisia said on Monday it is concerned about repeated allegations of serious violations by the Tunisian police, amid violent protests against police abuse that rocked the capital for six nights.

“These serious and repeated violations since the beginning of the year reveal continuing dysfunctions within the internal security services,” the United Nations human rights office in Tunisia said in a statement.

During protests in January, the police arrested more than 2,000 people, most of them minors. Human rights organizations said that hundreds of them were subjected to ill treatment and torture.

The interior ministry said that violations are individual and do not represent a systematic policy of the ministry, and years ago it launched a program to reform the security apparatus.

Last week, a man arrested by police on suspicion of dealing drugs died few hours after. The family accused the police of beating him to death. Tunisia’s interior ministry has denied the allegation.

A decade on from a revolution against poverty, injustice and police state, Tunisia has made progress towards democracy but its economic problems have worsened which sparked repeated protests.

Human rights activists said police abuses have threatened to undermine the democratic gains made since the overthrow of President Zine El Abidine Ben Ali’s repressive regime a decade ago.