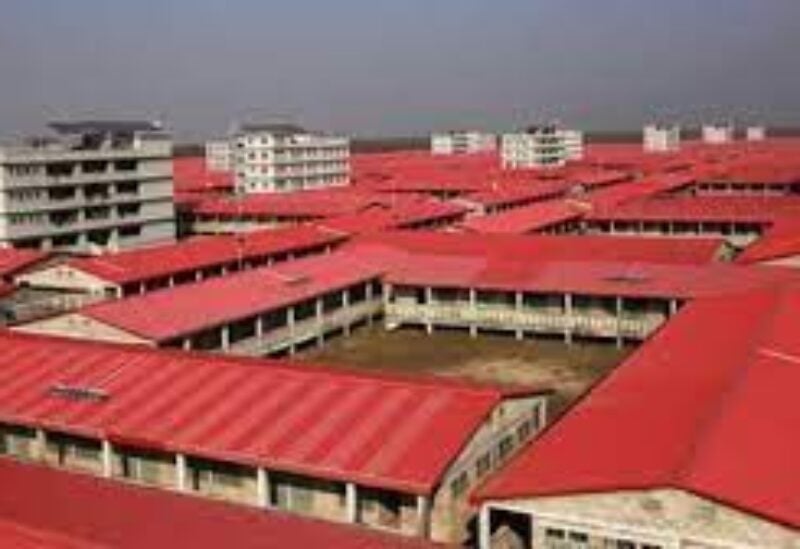 The UN has followed up a review of a remote island facility set up by Bangladesh for Rohingya refugees by calling on Dhaka to carry out the relocation process in a “phased manner.”
The recommendation comes despite warnings by rights groups that the site is vulnerable to severe weather and flooding.
A UN Refugee Agency (UNHCR) spokesperson in Dhaka, Charlie Goodlake, told Arab News on Saturday that the UN team is recommending that any future relocations “are undertaken in a gradual and phased manner.”
The UN planned to hold “further discussions” with Dhaka on the initiative, he said.
“It would help to ensure that the governance structure, facilities and services on the island meet the needs of Rohingya refugees living there,” Goodlake added.
The UN report released to the media late on Friday comes a month after 18 UN experts conducted their first visit to Bhasan Char island on March 17.
Soon after the UN’s visit, a 10-member team of diplomats — comprising heads of missions of embassies and delegations from Turkey, the EU, US, UK, France, Germany, Japan, Australia, Canada and the Netherlands — also visited the island on April 3 to review the facilities.
Bangladesh has moved 18,500 Rohingya refugees from crammed camps in its Cox’s Bazar district to Bhasan Char, dubbed Rohingya island, since December last year.
It wants to eventually relocate 100,000 of the more than a million refugees from the overcrowded camps to the remote island, located in the Bay of Bengal and 60 km from the mainland.
Bhasan Char was built by Dhaka in 2006 using Himalayan silt and sediment to ease the overcrowded camps in Cox’s Bazar district. The project cost more than $360 million.
Each Bhasan Char house has five-square-meter concrete rooms with small windows, and a toilet for 11 people.
However, the UNHCR said it was concerned about the island’s vulnerability to severe weather and flooding, leading to a UN proposal in December 2019 for a “technical assessment” of the site.
The three-day visit in March marked a breakthrough in the proposal and follows attempts by the UN refugee agency to visit the island amid concerns about whether the relocation of the Rohingya refugees to the island was safe.
Similar concerns were raised by several international rights organizations, which urged Bangladesh not to relocate the Rohingya to Bhasan Char, warning that the island was located in an area prone to cyclones and could be submerged during a high tide.
Dhaka said that it had set up 120 cyclone shelters — built more than a meter above ground — which could be used as hospitals, schools and community centers throughout the year.
However, in its latest report, the UN said it “recognizes the prevailing humanitarian and protection needs of the Rohingya refugees already relocated to Bhasan Char” and proposed holding more talks on the process with Dhaka soon.
“We hope the discussions will take place as early as possible. The discussions would be on the UN’s future operational engagement on Bhasan Char, including on the policies that govern the life and wellbeing of Rohingya refugees on the island,” Goodlake told Arab News.
He said the UN team recognizes the extensive investments made by the Bangladesh government in Bhasan Char, “including the facilities and infrastructure and other offshore coastal protection measures.”
However, he said that to further mitigate risks, the UN is calling for an “emergency management plan in the case of severe weather events, including the pre-positioning of essential supplies and goods on the island.”
The UN report also recommended that Bhasan Char be managed by “civilian authorities in an inclusive and consultative manner.”
On Friday, Bangladesh Foreign Minister Dr. A. K. Abdul Momen said that the UN had made “very good and positive observations” in its latest report.
In previous comments to Arab News, Momen also urged the UN to start its operations on Bhasan Char as it would be a “huge task to manage 100,000 refugees on the island.”
Bangladesh is currently hosting more than 1.1 million Rohingya at Cox’s Bazar refugee camp, believed to be the world’s largest refugee settlement.
The Rohingya are members of an ethnic and religious minority group, many of whom fled persecution in Myanmar during a military crackdown in 2017.
Buddhist-majority Myanmar considers the Rohingya to be “Bengalis” from Bangladesh, even though their families have lived in the country for generations.
Almost all have been denied citizenship for decades, and are also denied freedom of movement and other basic rights.