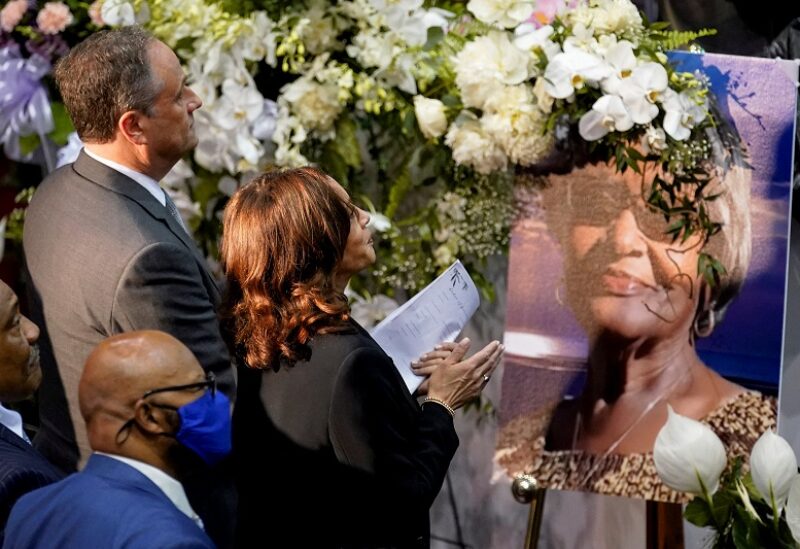 U.S. Vice President Kamala Harris and her husband Douglas Emhoff stand next to a portrait of Ruth Whitfield, an 86-year-old victim of the recent mass shooting in Buffalo, as they attend the funeral service for her at Mount Olive Baptist Church in Buffalo, New York, U.S., May 28, 2022. REUTERS/Kevin Lamarque

‘Enough is enough’ said the United States Vice President Kamala Harris, calling for an assault weapons ban in the country. She attended the funeral of 86-year-old Ruth Whitfield, who was killed two weeks ago during the Buffalo supermarket shooting. Her comments come days after another mass shooting shocked the country. Recently, an 18-year-old gunman entered an elementary school in Uvalde, Texas with an AR-15 semi-automatic rifle. He opened fire, killing two teachers and 19 children.
Harris said, “What happened here in Buffalo, in Texas, in Atlanta, in Orlando, what happened in the synagogues, this is a moment that requires all good people, all people who love God, to stand up and say, ‘We will not tolerate this. Enough is enough!'”

“We will come together and not let those people, who are motivated by hate, drive us apart or make us afraid,” she added. Harris spoke after Reverend Al Sharpton asked her to reflect on mass shootings during the past several years and said the US is experiencing “an epidemic of hate.”
The recent mass shootings in the United States have reignited the debate over gun control, especially the Texas shooting, where small children died. The Texas shooting is the worst shooting at an elementary school since the 2012 Sandy Hook attack in Connecticut. At that time, 20 children and six staff were killed.

“We will not let those people who are motivated by hate to separate us or make us feel fear,” Harris said at the funeral.

She also urged US lawmakers to take action on guns. “Congress must have the courage to stand up, once and for all, to the gun lobby and pass reasonable gun safety laws,” Harris tweeted.