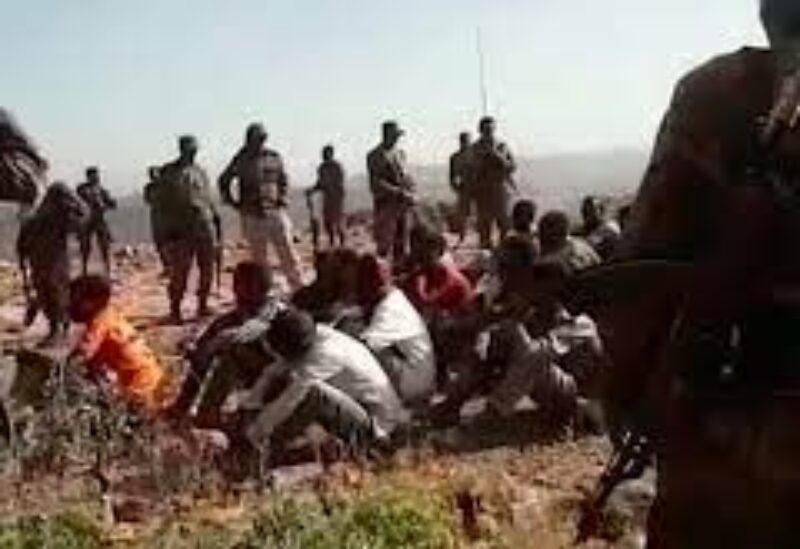 A video circulating on social media shows armed men in uniform shooting at a group of people and then kicking their dead bodies down a cliff in Northern Ethiopia, where a brutal conflict has been raging since November 2020.

At least four more videos have emerged online revealing the killings of civilians, and in March, a BBC Africa Eye investigation cofirmed it as evidence of a massacre carried out by the Ethiopian army.

The videos show members of the Ethiopian army firing at people at close range, as well as soldiers openly mocking and insulting the dead.

“I wish we could pour gas over them and burn them,” a voice can be heard in one of the videos, while second voice says: “Burn their bodies like the Indians do.”

“We don’t show mercy,”  voice of another armed man.

Geolocating precise locations of the atrocities captured in videos, the investigation found that the incident took place close to the town of Mahbere Dego in Ethiopia’s northern Tigray region.

Tigray has become the centre of intense fighting between the Ethiopian army and the forces of the Tigray People’s Liberation Front (TPLF) that previously has been ruling the region.

In response, he ordered a federal offensive in the region, marking the beginning of the conflict.

With no solution in sight, the conflict has displaced more than two million people, leaving four million m in need of urgent aid.

Why is the investigation regarding the massacre important?

The investigation team spoke with a resident of Mahbere Dego, who said 73 people have disappeared after the Ethiopian army took them in January. No one has heard about them ever since, he said.

Since the beginning of the conflict, Abiy was insisting that the military operation was targeting “criminals,” not civilians. However, the reports coming from the region have raised fears of ethnic cleansing. Abiy’s army has been accused of targeting civilians  and using sexual violence as a weapon in remote parts.

While the investigation couldn’t identify the armed men, they appeared to be wearing camouflage jackets and arm badges worn by the Ethiopian National Defence Force (ENDF).

The civilians can be heard speaking Tigrinya, the local language of the region, and minutes later, they are gunned down.

According to Laetitia Bader, the Horn of Africa director for Human Rights Watch, this footage was “obviously particularly alarming” while the observers have seen very serious abuses since the beginning of the conflict.

“We see what appear to be unarmed detained men, who are being executed,” she told BBC. “This is absolutely an incident that requires further investigation, because what we are seeing here in these videos could amount to war crimes.”