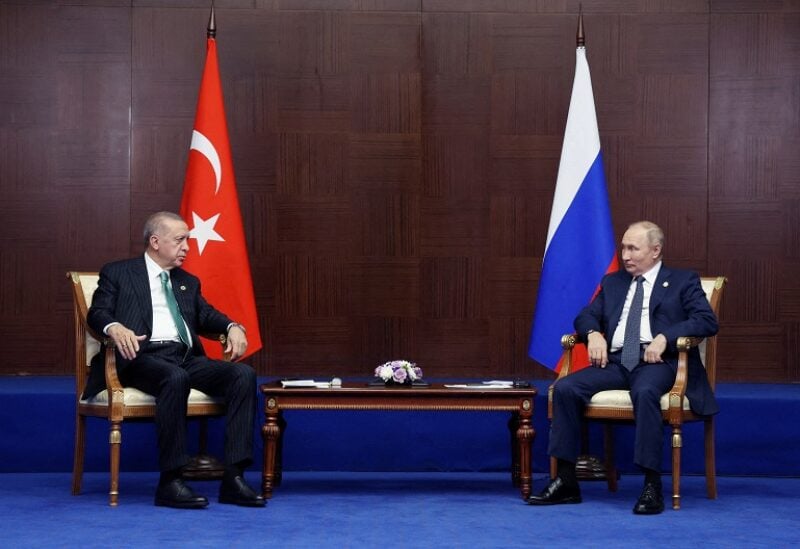 FILE PHOTO: Russia's President Vladimir Putin and Turkey's President Tayyip Erdogan meet on the sidelines of the 6th summit of the Conference on Interaction and Confidence-building Measures in Asia (CICA), in Astana, Kazakhstan October 13, 2022. Sputnik/Vyacheslav Prokofyev/Pool via REUTERS ATTENTION EDITORS - THIS IMAGE WAS PROVIDED BY A THIRD PARTY./File Photo

At the sidelines of the CICA Summit in Astana, Kazakhstan, Russian President Vladimir Putin held bilateral talks with his Turkish counterpart Tayyip Erdogan on Thursday.
During the meeting, Putin said that Russia is looking to create a ‘gas hub’ in Türkiye – a country which he believes can become the “most reliable” route to deliver gas to the European Union.
The ongoing Ukraine-Russia conflict has resulted in a number of sanctions on Russian gas from the EU and in retaliation, the Kremlin is looking to redirect its supplies from the Nord Stream pipelines.
As a result, Türkiye has emerged as a strategic location for Russia to maintain their dominance in the field of gas supply and also, continue to keep a clear channel to send it to European countries.

“In the course of the work of this hub, which we could create together, of course, it would also be a platform not only for supplies, but also for determining the price, because this is a very important issue – the issue of pricing,” Putin told Erdogan at the meeting according to Reuters.
“Today, these prices are sky-high; we could easily regulate [them] at a normal market level, without any political overtones,” he added.

The recent damage to the Nord Stream pipelines has also forced Russia to look for an alternative route in case the exports resume and Putin said that Türkiye can develop into a major player in the sector.

He also spoke about grain exports to less developed countries around the world and made it clear that Russia will be honouring their commitment to continue the distribution via Turkiye.

“We are determined to strengthen and continue the grain exports under the Istanbul agreement and the transfer of Russian grain and fertiliser to less developed countries via Türkiye.”