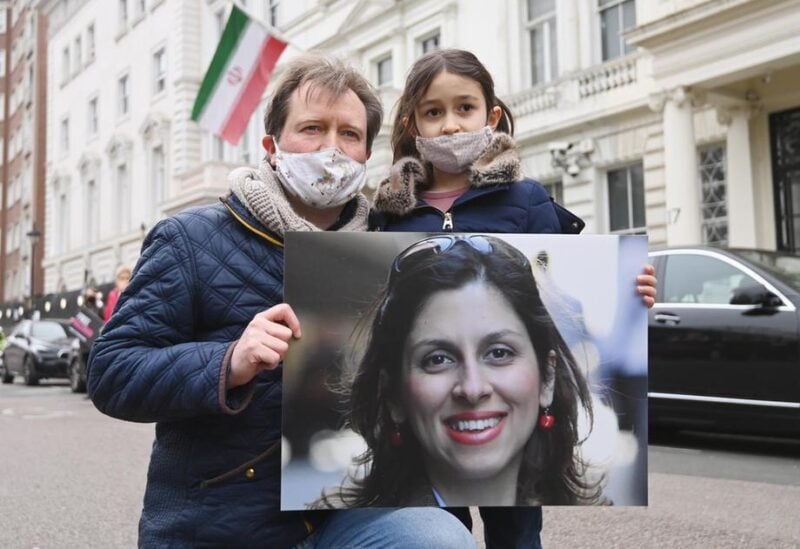 Husband of Nazanin Zaghari-Ratcliffe, with his daughter

As hopes rise that Tehran may soon reach a new agreement with major powers over its nuclear program, Nazanin Zaghari-Ratcliffe, the British-Iranian woman held in Iran, could soon be freed alongside other prisoners. The Times reported on Saturday.

Officials have suggested that a draft deal has been drawn up following months of talks in Vienna after the US withdrew from the 2015 Joint Comprehensive Plan of Action in 2018.
Iran’s economy has been devastated by sanctions imposed after the US withdrawal, and has increased its nuclear activity.

The new deal will see the lifting of sanctions, with Tehran reducing its program to levels agreed under the terms of the JCPOA, and downsizing its uranium-enrichment capabilities.

The election of hardliner Ebrahim Raisi as Iran’s president in June 2021 had led to fears that the new talks could collapse, but there is new confidence that a deal might be struck in the coming months.

US Special Representative for Iran Robert Malley has said it is “hard to imagine” a nuclear deal being struck with Washington while its citizens, such as Morad Tahbaz, remain incarcerated in Tehran.

Those citizens could well be freed under the terms of the proposed deal in return for a lifting of US sanctions. That has prompted hope that other Westerners could also be freed if the deal is reached.

The daughter of imprisoned British Iranian Anousheh Ashoori told The Times that Western prisoners held in Tehran’s notorious Evin prison are “cautiously optimistic” that they might be freed soon.

“Everyone knows that many times we’ve reached a crucial stage like this and nothing has come of it, so they are, as well as us, just waiting to see how the events unfold,” she said.
Zaghari-Ratcliffe’s husband Richard Ratcliffe said: “Nazanin is quite hopeful, in a way that she wasn’t at Christmas. Who knows what will happen, but it feels that we will either get good news or we won’t. Before, it was ‘we will either get bad news or no news’.”

Iran, though, will not receive a guarantee under the terms of a fresh deal that the US will not withdraw, as it did in 2018.

A source told The Times: “There is a sense that this text is it, that it’s time for a political decision to be made in Tehran. The Americans have made a very fair offer and I don’t think the Iranians will get a better one.”