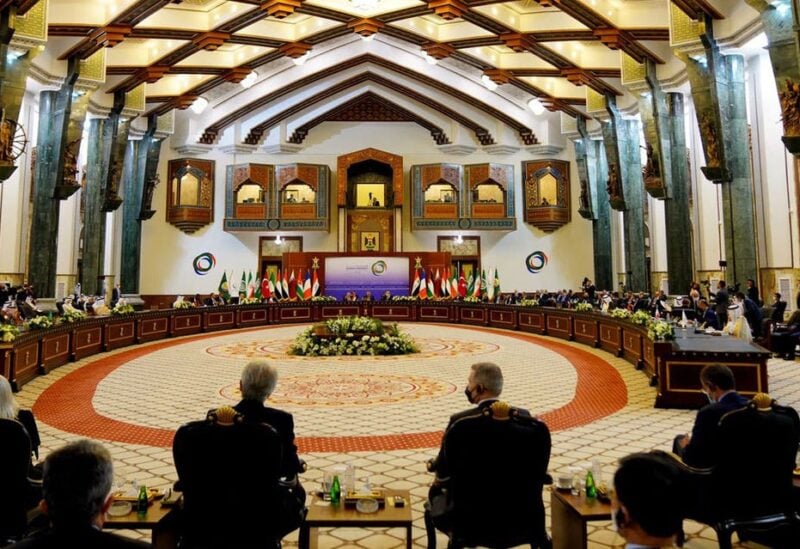 A handout picture released by Iraq's Prime Minister's Media Office on August 28, 2021 a general view of the Baghdad conference in the Iraqi capital. (Reuters)

The Iraq that hosted the Baghdad Conference for Cooperation and Partnership two days ago, is certainly not the Iraq that hosted the Arab Summit in 2012. Many things have changed in and around Iraq, and on the international scene as well. But the most significant change in Baghdad is the launch of a calm, yet bold, operation aimed at returning Iraq to Iraq. It was by chance that the summit would take place in Baghdad at the time when America was racing to get out of the beleaguered Kabul Airport, underscoring the need to cool down regional tensions.

Anyone who has paid attention to the difficult years following the American invasion of Iraq, and the ISIS invasion of a part of Iraqi territories thereafter, knows the magnitude of the dangers that befell this country. Years ago, an observer may have heard that Iraq had sunk into a quagmire from which there was no exit, that the war between its components was natural, that the marriage was forced and the friendship was fake. It was also possible to hear that the residence of the Kurds in the Iraqi federation would not last for long, despite what the constitution stipulated, and that the Kurds would choose to stay away from “ailing” Iraq. Years before that, there were those who said that the colossal American machine had seized Baghdad, and that Iraq would become a satellite in its orbit for decades. Then there were those who said that the features of the Iraqi state were being erased in the interest of a direct Iranian administration, even if it used factions as a fig leaf.

In light of these convictions—confirmed by costly experiences—we have seen clear indications of a process of restoring an “Iraqi” Iraq, without siding with either camp. Iraq, which has suffered greatly from conflicts on its territory, especially from the Iranian-American clash, started dreaming of becoming a land of dialogue between regional peoples, Iraqis, and the major powers present in the region. Thus crystallized something like a formula that is based on the approach of coexistence and moderation, and believing in the state and its institutions domestically, in dialogue and respect for mutual interests abroad, and dealing by the logic of sovereign states, not with the logic of force and coercion. Iraqi officials demonstrated a firm desire that any reduction of any external influence would benefit the balance of the Iraqi state, not the balance of the de-facto forces.

Iraqi state institutions had to regain their credibility among their own citizens as well as the whole world. The world cannot trust a country if its decision-making is divided among factions, some of which operate ready-to-use missiles and silenced pistols ready to hunt down activists. Prime Minister Mustafa al-Kadhimi had no choice but to wield patience and persistence in the long duel between the logic of the state and the logic of the factions. Al-Kadhimi expressed in this regard the longing of Iraqis for the state, and the feeling of the peoples of the region and the world that the return of the Iraqi Iraq is an Iraqi, regional and international need.

The features of the “new Iraq” were evident in the speeches and statements of Barham Salih and Mustafa al-Kadhimi. The state. The constitution. The institutions. Respect for the will of the electorate. The sovereignty of Iraq, its refusal to be an arena for proxy wars, and its refusal to be a source of threats to its neighbors. Refusing to slip into axes of power. Iraq’s desire to build bridges in all directions, and to be a land of dialogue, not a theater of conflict.

Nobody can claim that the picture is rosy and that the job is done, but it can be said that Iraq has been able to achieve significant steps in rebuilding its relations inside and outside the region. This did not happen, for example, in Syria. It does not appear likely in Lebanon due to the absolute comatose state of its authorities, which are preoccupied with cosmetics and facelifts while the country is rushing headlong towards obliteration.

It would be hasty to say that the “new Iraq” has decisively won the battle. There are those who still insist on dealing with the “Iraqi arena” instead of the Iraqi state. Arenas are equivalent to uncontrolled weapons, seasons of assassinations, overpowering the state, and divvying up maps and their populations.

Despite the difficult labor in which the upcoming elections will be a milestone, Iraq continues its progress to improve its image at home and abroad. Within the framework of the “New Iraq” project, Baghdad hosted the Conference for Cooperation and Partnership, which included neighboring countries and beyond. Iraq was able to gather opponents under one roof to encourage them to negotiate in order to be competitors, not rivals. The climate provided an opportunity for inter-Arab meetings that seemed impossible a year ago. Baghdad had scored a point in facilitation diplomacy when it helped establish and host Saudi-Iranian communications. The conference was significant in terms of venue, the level of participation, and what took place on the sidelines of its sessions. As for the protocol “gaffe” committed by Iranian Foreign Minister Hossein Amir-Abdollahian, it is one of the reasons that increase the need for the conference, whether it was a gaffe or a veiled message.

The return of Iraqi Iraq is a right for its people and a gain for its nation. The return of Syrian Syria follows the same principle. The same can be said of Lebanon and Yemen. The region has become exhausted with mini-battlefields and small armies. The state alone provides a cushion of stability and opportunity for prosperity. Two decades ago, Baghdad was at the beginning of a cycle of collapse. Arabs hope that the return of Iraq will mark the beginning of different times in neighboring countries and beyond. Certainly, Iraq’s return to its role restores a measure of the balance that was disrupted during Iraq’s absence.