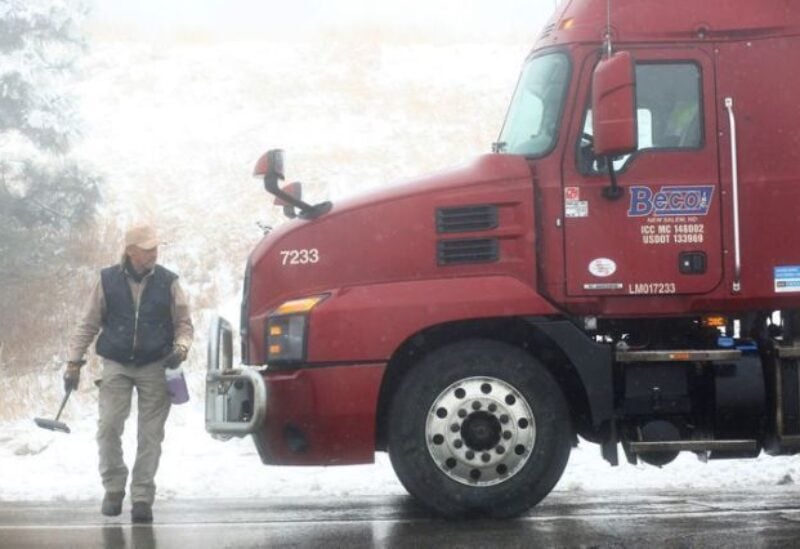 Gary Moscinski, pulls off of U.S. Interstate 70 in Colorado to clean and treat the lights of his semi-truck during the initial hours of a winter storm which meteorologists predict could bring several feet of snow to parts of the state, March 13, 2021. REUTERS/Kevin Mohatt

Federal government offices in the Washington, D.C. area were closed, and hundreds of thousands of customers in the Southeast were without power Monday, as a winter storm that was expected to bring heavy snow moved up the East Coast, the National Weather Service said.
“This will be the winter’s first accumulating snow for much of this area, so please use extra caution if traveling,” the weather service said Sunday night.
By early Monday, nearly 150,000 customers in North Carolina were without electricity, with an additional 140,000 outages in Georgia and more than 100,000 in South Carolina, according to PowerOutage.us, which aggregates data from utilities across the United States.
Ahead of the storm, Mayor Muriel Bowser of Washington declared a snow emergency in the District of Columbia for much of Monday. Gov. Larry Hogan of Maryland mobilised state resources, and Gov. Phil Murphy of New Jersey declared a state of emergency for five counties, warning residents to stay off the roads.
A winter storm warning was in effect early Monday for portions of Tennessee and North Carolina, along with a large swath of Virginia up through Washington and parts of Maryland and New Jersey, the Weather Service said. Up to 8 inches of snow was expected through Monday evening with localized amounts of up to a foot.
The heaviest snow, at 2 inches per hour, was expected to occur right after the transition from rain, meteorologists said, adding that the phenomenon called thundersnow — when thunder and lighting occur during a snowstorm — was likely. The refreezing of melted snow in the evening and overnight hours could lead to additional travel concerns.
In Washington, where a winter storm warning was in effect until late Monday afternoon, the weather system was forecast to produce up to eight inches of snow, according to the Weather Service, which warned motorists to plan for slippery road conditions in the morning. “If you must travel, keep an extra flashlight, food and water in your vehicle in case of an emergency,” meteorologists said.
Parts of Delaware, Maryland and New Jersey could see up to a foot of snow on Monday, with wind gusts as high as 40 mph. The tail end of the storm was expected to dump about 6 inches of snow across portions of Tennessee and just a few inches across parts of Georgia before moving north.
In response to the weather, D.C. Public Schools announced that classes would be canceled Monday, as did many other school systems across Maryland and Virginia, including several in the Richmond area. In New Jersey, some systems announced closures while others said they would operate with delayed openings.