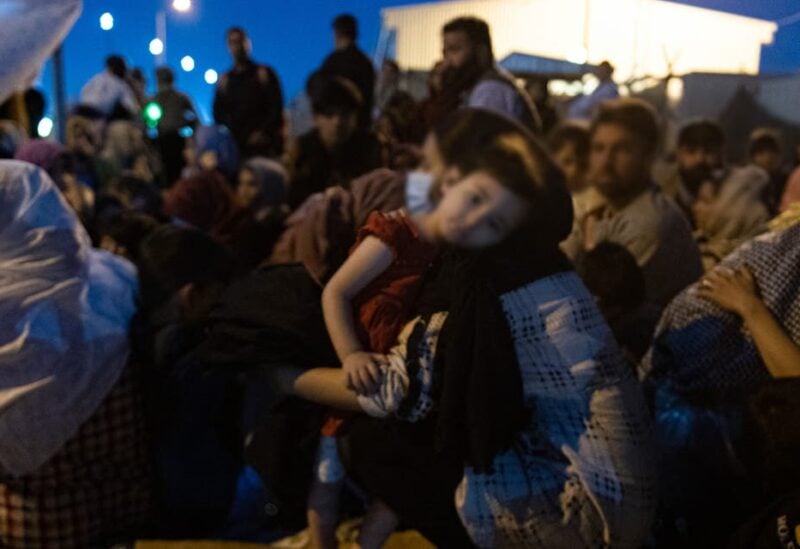 This handout photo taken and released by the French Etat-major des Armees on August 26, 2021 shows people waiting to board a French military transport aircraft at the airport in Kabul, to fly to the air base of Al Dhafra, near Abu Dhabi, and then to Roissy Charles-de-Gaulle airport, north of Paris, as part of the operation Apagan. The military operation dubbed Apagan was launched on August 15, 2021 in order to evacuate people from Afghanistan where the Taliban have taken over the country.

Until last week, Shabeer Ahmadi was busy covering the news in Afghanistan. But after a hasty and excruciating decision to leave his Taliban-controlled country for an uncertain future in Spain, he’s helplessly glued to news feeds on his cellphone, following every twist in the dramatic end of the evacuation of Afghans from Kabul.

The 29-year-old journalist and nine close relatives managed to board one of the evacuation planes and are now going through the lengthy asylum process while starting a new life in a northern Spanish city. But the future of thousands of Afghans who have not been able to escape, including members of his own family, is now the focus of his fears, Ahmadi said.

“There is a feeling of desperation in Afghanistan,” he said. “Imagine if you had made a building for 20 years now, that building is getting destroyed and you cannot go out from that building. It feels very bad. Our education, our hopes for ourselves, for our children, for our future, for our country is all destroyed.”

Tolo News, the private Afghan outlet where Ahmadi worked as deputy head of news, has been a target of the Taliban. But it was not only him who felt under threat in his immediate circle: Ahmadi’s mother is an attorney. His father, a former journalist.

And his brother, an engineer, worked on hydropower generation, a crucial infrastructure for the operation of the conflict-worn country.

Earlier this month, as the Taliban’s siege closed on Kabul, the family started applying for emergency visas to several countries. Spain was the first to react, thanks to the mediation of a Spanish journalist whom Ahmadi had befriended in Kabul.

It took the ten of them a long and challenging day amid the crowds piling up outside the airport – and another one inside, sleeping among hundreds on the ground – before they were cleared to go, despite some of them lacking passports.

“When I boarded the plane, I was thinking that finally, thank God I’m safe. But what happens to other people who remain in Afghanistan?” he wondered, speaking via video conference from Huesca, where the group was relocated on Thursday, one day after landing in Madrid.

“There are people calling me saying that there’s no salary by the government or by the Taliban now. And banks are closed and they cannot afford their families’ evacuation,” the journalist said.

He explained that as foreign troops are pulling out of the Hamid Karzai International Airport in Kabul, many of his acquaintances are looking for alternatives to leave Afghanistan via Iran and Pakistan.

The former correspondent thinks that the future of Afghanistan is bleak. He blames, largely, the US administration of Joe Biden for pressing ahead with the decision to pull out.

“Because it couldn’t negotiate a good deal with the Taliban, the US handed over us to the Taliban, to a group that has ties to so many terrorist groups around the world,” he said. “They abandoned the new generation of Afghanistan.”

He fears that “a very bloody war” will break out between the Taliban and ISIS in the coming months and years, drawing foreign extremist fighters and leaving millions of innocent lives caught in the conflict.

That’s why leaving Afghanistan, he said, “hurts every moment.” But he couldn’t work for the future of his country while his life was at stake, he added. And yet, if things calm down to a degree, if a government is formed that guarantees certain conditions even while the Taliban remain in control, he’s pondering returning home.

“I always tell my friends that any strong country is strong because of the people who work for it, so we cannot leave our country forever,” Ahmadi said.

“We are a generation that has not seen any single day without war in Afghanistan, but if you want our future generations to see such a day, we have to work for our country.”