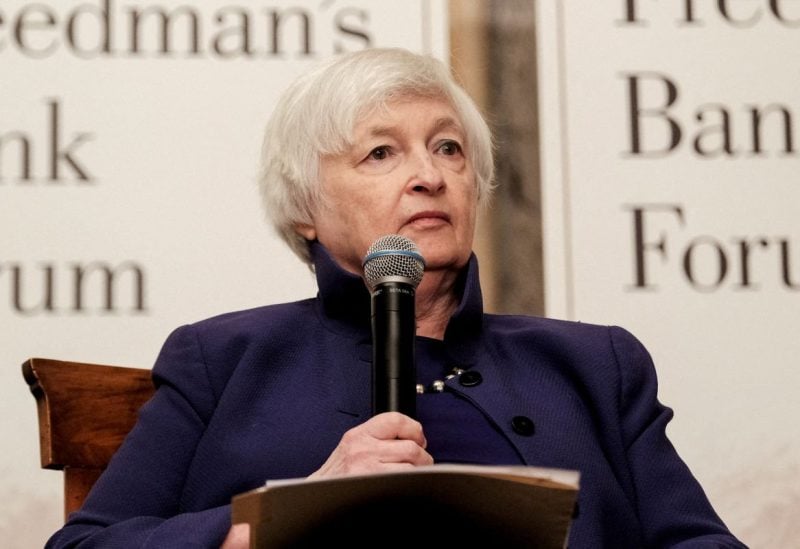 U.S. Treasury Secretary Janet Yellen participates in a discussion at the annual Freedman's Bank Forum at the Treasury Department in Washington, U.S., October 4, 2022. REUTERS/Michael A. McCoy

Janet Yellen will travel to India for the first time as US Treasury Secretary on Tuesday, focusing on the similarities between the world’s two largest democracies and opportunities for deeper ties rather than past trade and geopolitical squabbles.

Yellen is unlikely to dwell on India’s failure to condemn Russia’s war in Ukraine, or on India’s massive increase in discounted Russian oil purchases this year.

A Treasury official said the United States was not seeking to dissuade India from buying Russian crude as G7 allies and Australia finalize details on a Western-imposed price cap on Russian oil exports planned for Dec. 5.

On the contrary, the official told reporters that India will benefit from the cap’s lower prices.

In addition to participating in the 12-year-old U.S.-India Economic and Financial Partnership dialogue in New Delhi, Yellen will meet with Indian technology executives and discuss India’s leadership agenda for the Group of 20 major economies next year with Finance Minister Nirmala Sitharaman.

Yellen later travels to Bali, Indonesia for the G20 leaders summit as the group continues to struggle with deep divisions over the Ukraine conflict.

Yellen’s visit to India comes as the country rides the early stages of an economic boom that has outstripped China’s growth rate in recent years and is rapidly expanding its manufacturing base.

Morgan Stanley last week said in a research report titled “Why This Is India’s Decade,” that the country’s annual GDP is set double to $7.5 trillion by 2031, making it the world’s third largest, with manufacturing’s share rising to 21% from 15.6% currently.

With India’s growing economic clout, Washington and New Delhi have a “responsibility” to deepen their ties, greatly expanding trade and investment flows, said Atul Keshap, a former career U.S. diplomat who is now president of the U.S.-India Business Council.

“We’re both part of a high-trust ecosystem. Our companies collaborate with each other at the highest end of the value spectrum,” Keshap said. “Strategically, we have a lot of convergence and therefore economically we ought to have convergence.”

But the economic relationship has challenges, including trade disputes over U.S. steel duties and India’s retaliatory tariffs on Harley-Davidson motorcycles.

While India is part of the Biden administration’s signature Asian engagement project, the Indo-Pacific Economic Framework, it has opted against joining the IPEF trade pillar negotiations.

But among topics that Yellen plans to push is strengthening pandemic-battered supply chains through “friend-shoring,” or diversifying away from a COVID-restricted and increasingly authoritarian China to U.S. allies.

“That’s a message that’s extremely appealing to India,” said Richard Rossow, an India expert at the Center for Strategic and International Studies in Washington.

Both India and the United States have growing anxieties about their heavy reliance on China for manufactured goods and inputs from pharmaceutical ingredients to electronics, and India is eager to capture investment that is migrating away from China, he said.

The Treasury official said the two democracies were committed “to upholding the rules-based international order at a critical time for the cause of freedom.”

India sees this as a key way to meet both its climate goals and growing power needs, while developing its technology and industrial base for green energy, said Ambitabh Kant, India’s G20 sherpa.

He told a CSIS event last week that the IMF and World Bank “need to become institutions for driving climate action.”