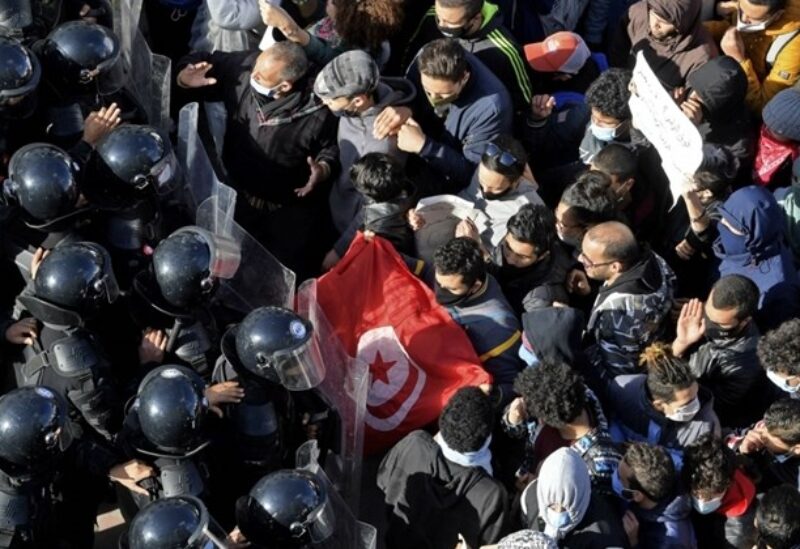 TUNIS: Hamza Nasri, a young Tunisian activist, hit the streets as part of anti-government protests in recent months. Now he says he is under police watch and afraid for his friends.

Tunisia won plaudits for its democratic transition, its free elections and new liberal constitution after its 2011 revolution.

The popular uprising put an end to a police state and established freedom of expression that was unprecedented in the North African country.

But a decade later, in the face of limited reforms to the security and judicial systems, activists say the risk of arrest places a “sword of Damocles” over their heads.

In January, security forces arrested hundreds of youths, including many minors, from underprivileged and marginalised neighbourhoods across the country during several nights of unrest.

They have subsequently arrested several young activists who denounced what they saw as a repressive police response.

Nasri said he feared the country had taken a U-turn.

The law student twice spent 48 hours in custody after anti-government protests in the capital Tunis in December and January, and now risks more than three years in prison on charges including blocking roads and insulting a police officer.

“If I am sentenced to more than six months (in jail), it will go down on my criminal record and I can say goodbye to my dreams of being a lawyer,” he said.

In Tunisia, sex before marriage, same-sex conduct, social media posts deemed offensive and evidence of cannabis use in urine samples can all be punishable by imprisonment.

Observers say this leaves young people vulnerable when they stand up to the authorities.

Rania Amdouni, a 26-year-old rights and democracy activist, was sentenced to six months in jail this month for insulting police officers, though her sentence was reduced to a fine on appeal and she was freed.

Dozens of human rights organisations in Tunisia and abroad had called for Amdouni’s release.

Both Nasri and Amdouni are connected to the association Damj, which defends the rights of LGBTQI people.

“Life for a young person in Tunisia is about trying to avoid the police as much as possible,” said 25-year-old Ahmed Ghram.

The philosophy student, sporting short clipped hair and earrings, was jailed for 15 days in January over a Facebook post criticising inequalities in the legal system.

Mehdi Barhoumi, an expert on rights and government in his thirties, said such arrests “place a real sword of Damocles over our heads”.

Barhoumi himself was arrested at a friend’s house and jailed for two days after criticising the growing presence of police unions during a private discussion.

He expressed concern at “the alarming security turn Tunisia is taking in its response to social movements”.

According to a study published in 2020 by peace-building campaign group International Alert, where Barhoumi works, 17 percent of 18 to 34-year-olds from several marginalised areas in Tunisia said they had been arrested over the past year.

The organisation said it had found irregularities in many of those arrests.

However, Tunisian police no longer have the discretionary powers they enjoyed under the regime of former autocrat Zine El Abidine Ben Ali.

While she acknowledged reforms had been slower than expected, she said there was now more “professionalism” among the security forces, and that a handbook had been published to improve police legal compliance, such as on arrests.

The right to protest is enshrined in Tunisia’s constitution and police abuse gets media attention.

“We are yet to witness a trial where police officers are punished for misbehaviour,” she said.

Amine Ghali, director of the Kawakibi Democracy Transition Center, said a return to a “systematic police state” was unlikely.

But he warned that some actors hostile to reforms, such as police unions and elements of the justice system, were returning to prominence.

Expert Haykel Mahfoudh said the greatest source of hope came from the new generation of police officers who have grown up in a democracy.

“There is a civic dimension to their conception of things,” he said.

They have “absorbed certain ideas about governance”.