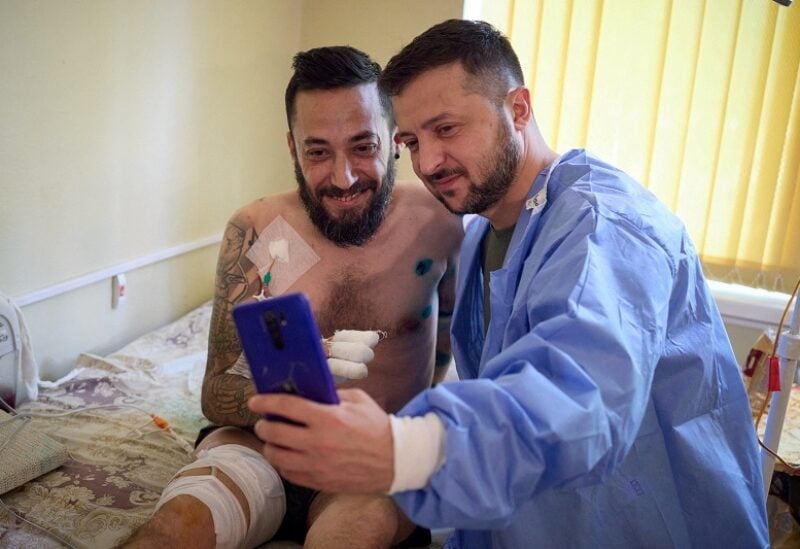 Ukraine's President Volodymyr Zelenskiy makes a selfie with an injured Ukrainian serviceman in a hospital, as Russia's attack on Ukraine continues, in Odesa, Ukraine July 29, 2022. Ukrainian Presidential Press Service/Handout via REUTERS ATTENTION EDITORS - THIS IMAGE HAS BEEN SUPPLIED BY A THIRD PARTY. TPX IMAGES OF THE DAY

Amnesty International accused the Ukrainian army of endangering civilians and violating humanitarian law in their fight against Russian forces, which led to a harsh condemnation against the group by the Ukrainian President Volodymyr Zelensky.

He called out the double standards of the international rights group saying that Amnesty had tried to “amnesty the terrorist state (Russia) and shift the responsibility from the aggressor to the victim”, Zelensky said in his daily address, reports AFP.
The Ukrainian leader said that Amnesty was drawing a “false equivalence” between the actions of Russia’s invading forces and Ukrainians defending their homeland.

“There is no condition, even hypothetically, under which any Russian strike on Ukraine becomes justified. Aggression against our state is unprovoked, invasive and terrorist,” he said.

In its report, Amnesty listed incidents when Ukrainian forces appeared to have exposed civilians to danger in 19 towns and villages in the Kharkiv, Donbas and Mykolaiv regions.

“We have documented a pattern of Ukrainian forces putting civilians at risk and violating the laws of war when they operate in populated areas,” Amnesty secretary general Agnes Callamard said.

“Being in a defensive position does not exempt the Ukrainian military from respecting international humanitarian law.”

The report noted that residential areas where Ukrainian soldiers based themselves were miles away from frontlines, and “viable alternatives” were available that would not endanger civilians,

Though the schools were located in civilian neighbourhoods, they have been shut during the conflict.

“We have no say in what the military does, but we pay the price,” the report quoted one resident as saying.