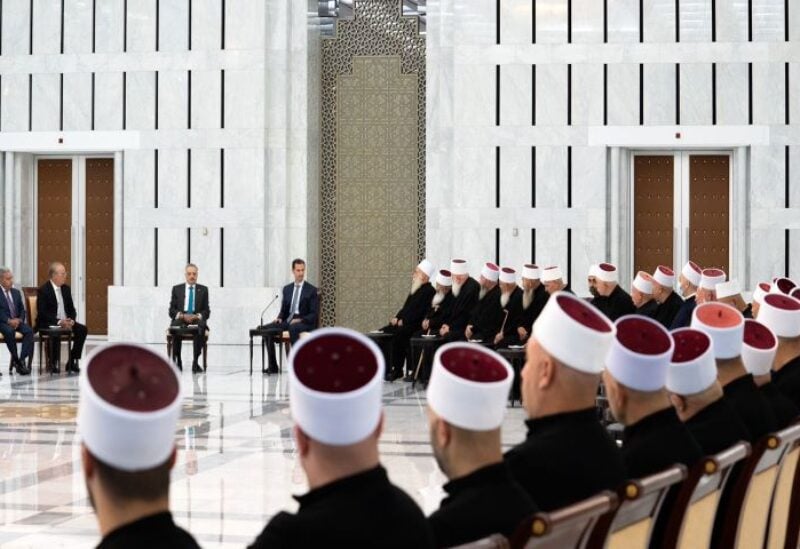 Delegation from Lebanon to Syria

In his welcoming word before the delegation, al-Assad said “the relations between the two countries should not be affected by changes and transitory circumstances, but rather efforts must be exerted to strengthen them,” stressing that “Syria will remain with the Lebanese people and support them at various levels.”

“Leaders who have the correct and clear vision are the ones who can, through the mutual relationship with the people, lead them to the right goal and stability and to protect them from the pitfalls confronting them at different times, in light of the attempts to dismantle the social and national structures in the region,” he said.

“The battle that leaders must fight is the battle to protect the minds against what is targeting them, which is the abolition and abandonment of identities,” al-Assad underlined.

In turn, Arslan considered in his word that “the legendary steadfastness of Syria paved the way for this great transformation in the international scene, which has not yet been completed…”

“This is the lesson that generations, our generations, from the depths of our east and our orient, must memorize, as well as the generations of the free world who stand by our side in this aggressive war being waged against us,” he added.

“In light of this, we are no longer tempted by the discourse of Western governments, with democracy, human rights, and the great lies labeled as ‘war on terror’….” he affirmed.

Arslan continued to assert that members of the Unitarian community, the sons of Syria, Lebanon and Palestine, have only one project, “which is the project of patriotism and civilized Arabism,” adding that “their destiny and historical role is to be elements of stability, openness and modernity,” noting that “they are known for their love and appreciation for brave and heroic men.”

He also emphasized the importance of “resuming the normal Lebanese-Syrian relations, as the two countries together constitute an economic integration that has become an urgent necessity for both countries.”

“What happened yesterday in terms of Syria’s gracious agreement to allow the passage of Egyptian gas and Jordanian electricity through Syrian territory to Lebanon confirms that the return of these relations is inevitable, especially with the presence of many files that require permanent and continuous coordination,” confirmed Arslan, citing the Syrian displaced dossier as being at the forefront of said files and noting that the main objective of leaving it hanging is due to foreign agendas.

He explained that the initiative was previously taken to coordinate with the Syrian state to start resolving this file, which was fully supported by the Syrian President, but unfortunately, despite the approval of the return plan by the Lebanese Cabinet, the government was unable to proceed with implementation since the will of the international community prevented it.”