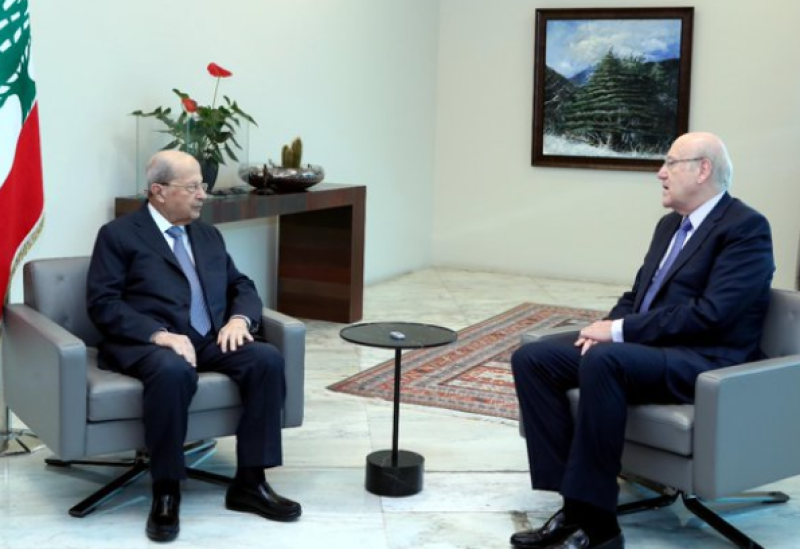 President of the Republic, General Michel Aoun, met Prime Minister Najib Mikati, today at the Presidential Palace, and addressed with him general and governmental developments.

After the meeting, Premier Mikati did not make any statement, and was asked if he still intends to stay in Baabda Palace until the formation of the government? Where he replied: “They moved everything to Rabieh. There is no place for me to sleep”.

The President received Syrian Ambassador, Ali Abdel Karim Ali, on a farewell visit marking the occasion of the end of his diplomatic missions in Lebanon.

President Aoun awarded Ambassador Ali the National Cedar Order of the rank of Senior Officer, in appreciation of his efforts in strengthening and developing Lebanese-Syrian relations.

After the meeting, the Syrian Ambassador made the following statement:

“I was honored to meet the President of the Republic. I regret to say goodbye after years of service in this dear brotherly country, and I am grateful for the medal that I was honored with.

We had a connection with His Excellency when he was an MP and head of a parliamentary bloc, in addition to the relationship with him after he became president. It was an experience in which I learned and received experiences, and of course.

I also faced many difficulties, especially since Syria faced and continues to face the fiercest complex and dangerous war facing a country in the world. Despite this, the Syrian people and army have withstood the equanimity of its leader and in cooperation with allies and brothers, and I will record here that His Excellency the President was one of the first to bet on Syria’s steadfastness and victory since the beginning of the terrorist war sponsored by many international powers and in which many countries participated, as terrorism was invoked to it from.

We hope that Syria, which has persevered and won, recovers and the two brotherly countries, Syria and Lebanon, also recover, because both have an interest in coordination and integration with the other, because families are common, geography unites, history unites, and challenges impose this tennis, whether these challenges are Israeli aggression or terrorism, or economic and security in all senses.

In this context, I am always optimistic that there are effective and real national forces, and their percentage is dominant and large in Lebanon. There is keenness in Syria for this brotherly relationship and its development, and in my estimation that it, yesterday, today and tomorrow, is keen on this integration and rises above the opposition and reactions for the benefit of the two countries and peoples that unite them have deep ties in all directions.

About Damascus’ refusal to receive the Lebanese delegation to discuss the issue of demarcating the maritime borders between the two countries, and about the date of launching bilateral talks in this regard in light of the Treaty of Brotherhood, Cooperation and Coordination between them, in addition to the issue of the return of the displaced, Ambassador Ali replied “His Excellency President Aoun called the Syrian President four days ago, and he called me, and on that day there was confusion in the communication. I was later informed by Deputy Speaker Elias Bou Saab that there was a contemplation of visiting a delegation headed by Damascus after the two presidents contacted.

I said they should send us a letter to address the Ministry of Foreign Affairs, and I will call and inform them that you will send this letter. I was informed of the letter on Sunday evening, and that was late because it was said that the beginning of Thursday was, then the date was modified to be Wednesday. I told them, however, that we want there to be an official letter so that the ministers and officials in Syria set the dates according to their schedule and their connections. After the letter arrived late, and the date was not set or discussed, it was announced from Lebanon that the delegation would go on Wednesday, and thus the response came. The date was not cancelled, but it was said that it was agreed upon later, because after the date was set on Wednesday, the program in Syria was full, and the connections were already in place”.

Question: Is there another appointment?

Question: Will it be during the term of President Aoun or after?

Answer: “I have heard the words of His Excellency the President, and I will inform if time is available in the remaining few days, perhaps, God willing, or it will be at a later date”.

Question: Is there a Syrian openness on this issue?

Answer: “I think that between Syria and Lebanon there are no closed places in all matters. There is a treaty of brotherhood and cooperation between the two countries, and Syria is always committed to it, even in matters that are unresolved so that they are always facilitating.

As for the file of the displaced, Syria has spared no effort or left room for facilitation without doing it, the last of which is the Terrorism Law, which pardons terrorist crimes unless they reach the killing of a human being. I met officials of international organizations and was happy with the position of the government, the ministers of foreign affairs, social affairs and the displaced, in addition to His Excellency the President and the Premier and everyone else, when they spoke that the United Nations and influential or donor countries are inciting the Syrians or spreading an atmosphere of misinformation and confusion.

Syria is eager and willing that its people return to rebuild what was destroyed by the dangerous and complex terrorist war. The Syrians are also willing because the Syrians have no dignity in all the places of refuge compared to what he had in his country. It is true that there is a suffocating siege now, and this siege affects Lebanon as well. Therefore, I appreciate the position of the Lebanese officials in telling the truth to international organizations and their officials, because Syria welcomes and facilitates. The modest sums that are paid to Syrian refugees in Lebanon or elsewhere, if they are given to the Syrian in his country and encourage him to return, will become twice as powerful, because Syria provides assistance in renovating homes, education and medical care, and we see that the next is recovery for Syria.

We are in front of a world of conflicts taking shape and it is on a hot plate, and it is in the interests of the two countries that they meet. In this file, Syria is facilitating and welcoming. No Syrian refugee was entered and arrested, and this is what Major General Abbas Ibrahim said, who recorded this in appreciation of him. Hundreds of thousands of people have returned through the Lebanese General Security in the past years, and none of them has been subjected to anything but appreciation, in light of the unjust and unilateral blockade that prevented even the import of Egyptian gas and Jordanian electricity through Syria”.

Question: Do you hold the United States of America responsible?

Answer: “Of course, who bears the responsibility, then. At that time, the United States informed His Excellency the President of its approval, and then the government delegation went up and I was with him. We in Syria are keen on facilitating brotherhood, and cooperation is imposed by our interest and that of brotherly Lebanon, and let us be optimistic about what is good”.

About the speech that linked the solution of outstanding issues regarding the Shebaa Farms to the demarcation of the maritime borders between the two countries, the Syrian Ambassador replied: “Certainly, leaders and governments should meet and the concerned ministers should meet, and that it is not the ambassador who answers that. Syria is always welcoming, facilitating, and eager for coordination that leads to results”.

Mrs. Portelli briefed the President on the activities carried out by the region in helping Lebanon and its people in the social, health and educational fields, and the program it has prepared for distribution to many associations and institutions that cooperate with it.