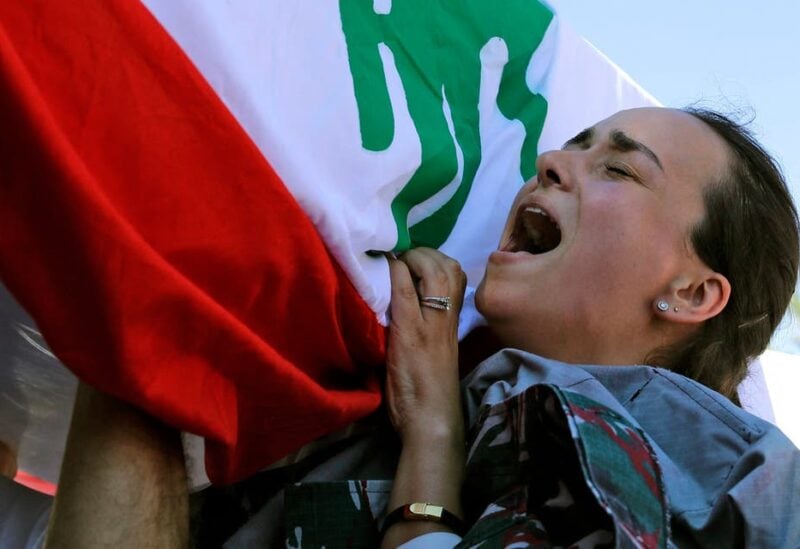 Karlen cries during the funeral procession of her husband Charbel Karam, brother Najib Hitti, and cousin Charbel Hitti in their hometown of Qartaba, north of the Lebanese capital Beirut, on August 17, 2020. (AFP)

One year on, Karlen Hitti-Karam still remembers August 4, 2020, as if it were yesterday. She recalls every moment, every detail. She recounts how her late husband, Charbel, kissed her on the forehead in the morning before leaving for work, not knowing that this was the last kiss.

Karlen’s suffering was not solely limited to the loss of her 37-year-old husband, Charbel Karam. Karlen also lost her 26-year-old brother Najib Hitti and her 22-year-old cousin Charbel Hitti in the deadly blast. The three men were firefighters at the Beirut fire department. They were on shift on the day of the explosion and died while trying to extinguish a fire that broke out before the port exploded.

“At 6:00 p.m. sharp, my husband video-called us. He was on his way to respond to what they assumed was a blaze in a warehouse at the Beirut port along with my brother, cousin, and other fire brigade first responders,” Karlen told Al Arabiya English. “He excitedly wanted to tell our little girls that he was going to put out a fire.”

And then, the explosion happened. A tremendous blast, fueled by about 2,750 tons of highly volatile ammonium nitrate, utterly wiped out much of the port and rolled across the city.

Instantly, Karlen – who lives in the mountain village of Qartaba, north of the capital, rushed to Beirut, jumping from one hospital to another.

“Glass and rubble on the floor, bloody people everywhere, a total destruction … that’s how the hospitals looked like,” she said. “But what was more painful was that no one knew anything about them; we couldn’t find them anywhere.”

On August 12, Najib and Charbel Hitti were confirmed dead, while Charbel Karam’s remains were found on August 15.

The Beirut explosion killed at least 200 people, injured more than 6,000, left 300,000 effectively homeless, and severely damaged buildings, critical health infrastructure, and medical supplies across the capital. It was one of the largest non-nuclear explosions ever recorded. Many blame the blast on decades of negligence, mismanagement, and corruption by the government and the ruling elite at large.

Repeated promises of reforms by Lebanon’s political class never materialized. This class, which has run the country since the end of the civil war in 1990, includes some former warlords who have been held liable for bringing Lebanon to an endemic collapse.

“I haven’t gotten over it yet”

Karlen’s husband, brother, and cousin grew up together as close relatives and friends and got jobs together as firefighters. Karlen used to consider them as her support system.

“We are indeed preparing for the first anniversary of the Beirut explosion, but for me, August 4, 2020, hasn’t ended yet. I refuse to believe that I lost the three of them that way,” she exclaimed.

Karlen has two daughters, Angelina, who is 3 years 9 months old, and Katerina, who is almost 2.

“Katerina does neither know her father nor her uncle. Angelina, however, keeps on asking me about them. ‘When will they come back?’ she asks,” Karlen said.

“I shall remain strong to raise, protect, and back my daughters up. And I will not rest until I find out the truth, until every person behind this horrendous crime is brought to account.”

According to Karlen, the truth suffers but never dies.

“Justice should and will be served, even if takes decades. We’re not just a few people demanding this. All the Lebanese want to know the truth. They want to know who destroyed their city and killed their loved ones,” she noted, adding that if she ever feels that she will be left without answers, she shall leave the country behind with her little ones.

“My girls are still very young now. What will I tell them when they grow up and learn what happened? If justice won’t be done, how will I explain to them that their father, uncle, and cousin were killed in a despicable explosion, and no one was punished for this act of cruelty? I cannot let them live in a country that fosters the culture of impunity; I’d better take them and leave.”

“Immunity shall be lifted”

Karlen urged the Lebanese authorities to immediately lift the immunities granted to officials.

“Let justice take its course. Any person summoned for questioning should appear before the judge regardless of their position or role,” she stressed. “Those who are refusing to do so are forcing us to raise question marks over their involvement.”

In July, Judge Tarek Bitar, who became the lead investigator into the blast after his predecessor was removed in February, announced his intention to pursue senior politicians and former and current security chiefs in the case and requested permission for their prosecution.

According to local media, dozens of Lebanese MPs signed a petition to try the officials at the Supreme Council, a judicial body concerned with dealing with matters of impeachment, meaning that Bitar will not be able to charge them. Families and relatives of the victims have since then launched the hashtag #NitrateMPs to shame these parliamentarians, considering their move an obliteration of an already stalled investigation.

“We have faith in Judge Bitar. He’s our last glimmer of hope. We can see that he’s doing his best to prosecute the country’s big shots – who either had direct or indirect involvement in what happened – and we hope that he will succeed,” Karlen concluded.