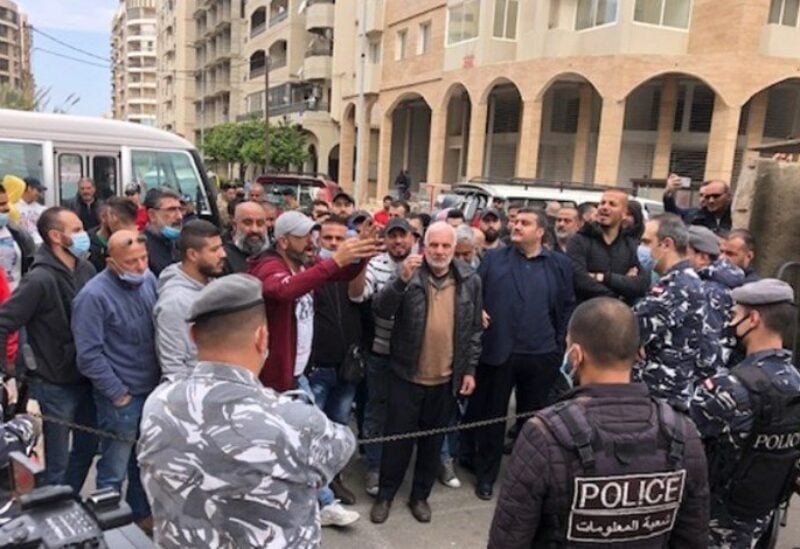 Protesters hold sit-in in front of the Palace of Justice in the northern city of Tripoli.

Bus drivers staged on Monday a sit-in in front of the Palace of Justice in the northern city of Tripoli to protest the detention of two drivers after two young men were killed in a road accident.

The two men were killed last week when they drove into a truck that was parked across a road to block traffic. The truck was parked by protesters who sought to block Al Heri – Chekka highway as they vented their anger at the deteriorating living conditions in Lebanon.

North Lebanon Drivers Union chief, Shadi al-Sayyed, called for the “immediate release of detainees,” saying the responsibility for the accident shall be assumed by the concerned truck driver and members of the Internal Security Forces.

The demonstrators vowed they will continue to hold sit-ins until the detainees are released.

“We offer our condolences to the families of Zgharta who bid farewell to two young men today, Elias Merheb and Nehmeh Nehmeh,” Maronite Patriarch Bechara Boutros Al-Rai said during a mass held in Bkirki last Tuesday.

“We regret that all such things are happening today as the people are angry. We stand by their side but citizens shouldn’t be punished on the roads because they’re not the ones who created problems in Lebanon nor did they impeded the formation of a government or dragged their feet in resolving financial and cabinet crises,” he added.

“Lebanese citizens are paying a double price; one for their needs and another one on the streets,” Patriarch Al-Rai said, reiterating that “people should be respected so that they don’t get fed up with the country.”

Demonstrators kept blocking roadways across Lebanon in protest over the country’s financial meltdown and political deadlock, despite a call by President Michel Aoun for security forces to clear the obstructions.

“Every person in this country has to shoulder responsibility. Let protesters go to the houses of the leaders and their palaces, not block roads,” the priest conducting the funeral of the two men told the gathering.