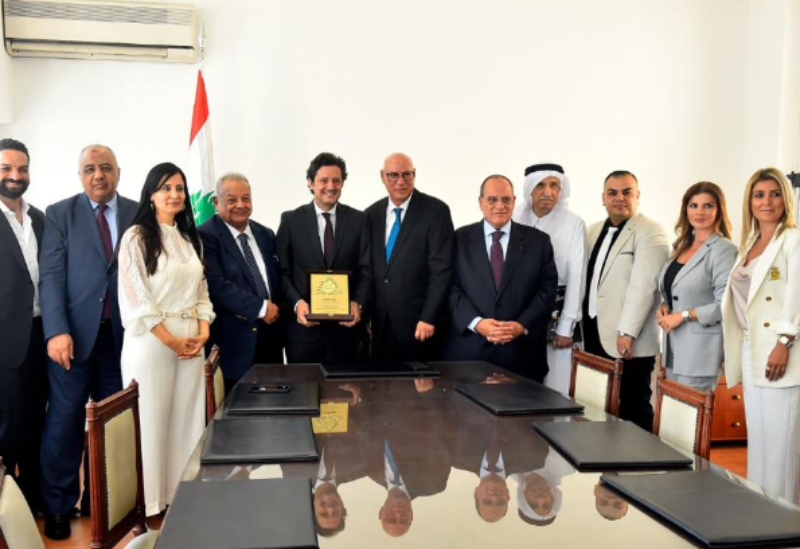 Caretaker Minister of Information, Ziad Makary, on Thursday welcomed a joint delegation representing the League of Arab States and the Union of Arab Producers, with whom he discussed prospects for cooperation with the Ministry of Information.

In the wake of the meeting, the Assistant Secretary-General and Head of the Media and Communications Sector of the League of Arab States, Ambassador Ahmed Rashid Khattabi, said that the meeting had been an occasion to brief Makary on the joint delegation’s project to strengthen the drama industry in the Arab world, especially in Lebanon, which is deemed “a fertile ground for all the ingredients that pay off in this industry.”

“We’ve held an in-depth discussion with His Excellency about the means to develop media production in its various components, including the scientific industrial structure and ideas related to developing work in this field,” Khattabi added.

In turn, Vice President of the Union of Arab Producers, Sadiq Al-Sabah, said: “This meeting is to confirm that the private sector plays a major role in the advancement of Lebanon; we believe that there are positive signs in terms of cinematic and dramatic production in Lebanon, and we hope that the union will play a positive role in the country’s economic cycle — against all odds. The human and geographical elements in Lebanon remain a motivating factor to complement our cinematic and dramatic activities — with stronger cooperation with our Arab brothers.”

For his part, Makary said, “We always have to inspire optimism among young men and women working in this sector, which employs thousands of people in the country. The most dangerous thing that Lebanon is being exposed to is the daily bleeding of youth migration. We as the Lebanese state, despite all the difficult circumstances, like to give hope.”

Makary added, “Tomorrow, we will announce the steps that the state and the Ministry of Information will take, and we hope that it will be a start of a new era of cooperation with our Arab brothers.”

Head of the Union of Arab Producers, Ibrahim Abu Zakri, also seized the occasion to thank the Minister of Information for welcoming the delegation and for briefing the concerned ministers on the outcome of the Union’s visits.