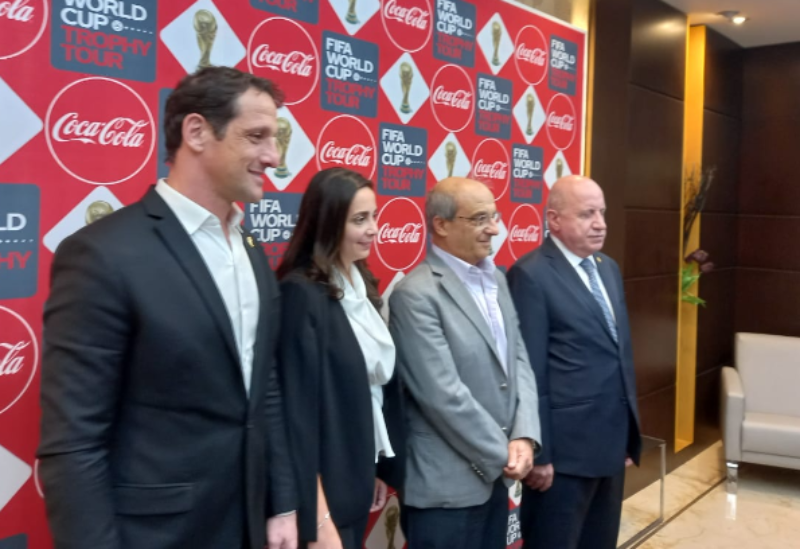 A Qatari plane arrived at Beirut International Airport’s General Aviation Building this morning, carrying the Coca-Cola marketing team and a number of Korean stars who had previously raised the World Cup. The visit was part of the FIFA World Cup’s tour of several places across the world, and it was presented today at Beirut Airport by player Juliano Belletti before the team flew to Uzbekistan.

In a brief welcoming word to the FIFA team, Kallas thanked them for their trip to Lebanon and for the trophy’s visit, considering that “with the support and good initiative of Coca-Cola, Lebanon was included in the list of FIFA World Cup visits.”

Kallas added that “the Qatar Cup is the Lebanon Cup,” and that “Lebanon is concerned with the international match that is taking place in Qatar, similar to every activity that takes place in all Arab countries.”

“I am interested in welcoming the player Belletti, and consider that this visit is a civilized encounter that confirms Lebanon’s significant standing with FIFA and among the Arab countries,” Kallas went on, recalling the announcement of the League of Arab States and the Arab Ministers of Youth and Sports “in deeming Lebanon as the capital of Arab youth 2020/2022.”

Kallas praised the good cooperation with Football Association President Hashem Haidar, the Sports federations and FIFA, “to give a civilized image and restore Lebanon to the heart of the world through sports…”

Haidar, in turn, welcomed the visiting team in Lebanon, “which comes as a support for Lebanon and Lebanese football,” hoping that “good initiatives for Lebanon will continue.”

For his part, football player Belletti expressed his pleasure to be present in Lebanon.