Langden: It’s not the time for polite diplomatic rhetoric with Lebanese politicians 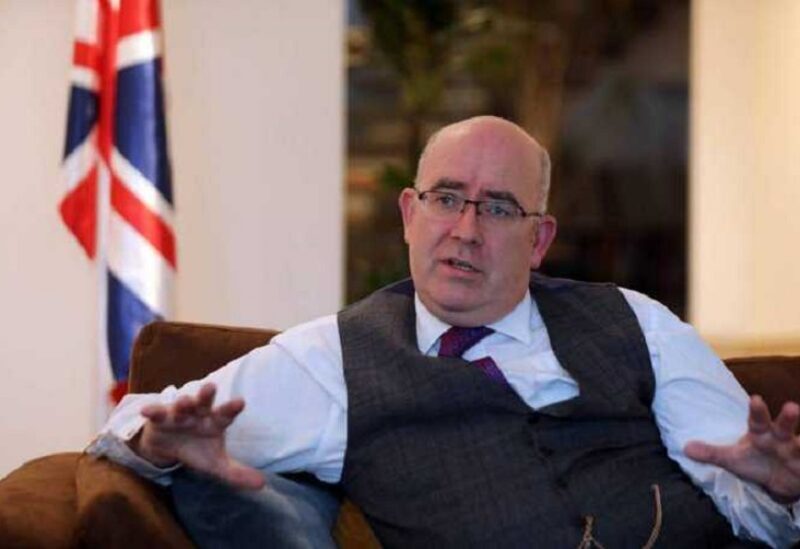 The British Chargé d’Affairs to Beirut Martin Langden stressed that “Lebanon is going through one of the most difficult crises in its history, and its causes are complex and long-term, but serious reform and profound change are necessary.”

In an interview with Al-Arabiya Net, Langden also criticized the role of Hezbollah in the region, from Iraq to Syria and Yemen, calling for Lebanon’s neutrality from regional conflicts.

He considered, “The absence of serious reform will pose an increasing existential threat to the Lebanese nation. Therefore, political leaders and all those with influence must put aside their personal rivalries and interests and show the responsibility and leadership that this moment of danger demands, and a commitment to reform for the sake of the national interest.

However, he pointed out that “despite the importance of forming a new government step, it does not solve these problems, but without this step, Lebanon will remain stuck and drown.”

On whether the United Kingdom will impose sanctions on those responsible for the continuing crisis in Lebanon, the Chargé d’Affairs to the embassy in Beirut pointed out that “political and economic corruption has destroyed Lebanon’s stability and prosperity, and stole the future of many people.”

He added, “Perhaps we have all been very tolerant with political officials for a long time. From here we confirm that the British government is clear about not accepting the practices of these people, and we now have a“ Magnitsky ”penal system that we can use against those who steal from the Lebanese state or engage in other violations. “.

“Britain is in an active and focused discussion with the main partners to understand the best way in which the international community should encourage positive change in Lebanon, but real reform, transparency and accountability remain essential if there is a real shift in Lebanon’s prospects,” Langden said.

In the context, he said, “I have spoken frankly with all the Lebanese officials, and I am not interested in playing the“ blame ”game, as there is enough of that. The UK is very concerned about the current situation, and I think we are right about that. ”

“This moment is not for polite diplomatic rhetoric, but rather a moment for Lebanon’s true friends to sound the alarm and speak honestly and even frankly about the danger this country now faces,” he added. Lebanon is rapidly heading towards collapse and time is running out, and the longer inaction, the greater the risks we face, and the greater the price  the Lebanese will pay in the end, and they are actually paying it. ”

Moreover, and whether the blockade imposed on Hezbollah contributed to exacerbating the existing crisis in Lebanon, the Chargé d’Affairs to the British Embassy said, “What Lebanon is witnessing today is primarily a result of long-term factors and practices and not because of recent developments.”

He continued, “The United Kingdom has strongly criticized Hezbollah’s activities, especially its destabilizing role in the region, including in Syria, Iraq and Yemen. Are these activities really in the national interest of Lebanon? Should Lebanon allow itself to stand on the front lines of others’ struggles, especially at this fragile time?

He also added, “In my opinion, Lebanon’s neutrality and its commitment to the policy of distancing itself from regional differences is a necessity today more than ever before.”

As for the steps that must be taken, to avoid the continuation of the collapse, he said: “The political leaders in Lebanon know very well what needs to be done, and when Lebanon is ready to take these steps, they will find friends’ hands extended and open, ready to support them on that journey. ”

He concluded by stressing the need for “change to come from within, not to be imposed from outside,” saying, “I hope that all who have real interests for Lebanon will work together and this will undoubtedly be a tremendous task. I can promise that we will be there for Lebanon when that moment comes, but it has to happen soon. ”