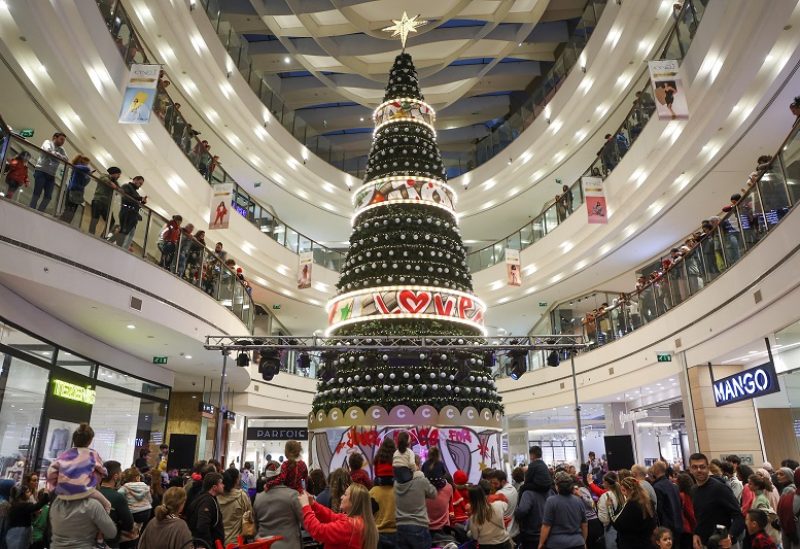 People gather near a Christmas tree inside a shopping mall during holiday season in Hazmieh, Lebanon December 22, 2022. REUTERS/Mohamed Azakir

The Lebanese received the holidays, with joy is only as deep as their pockets.

Some commercial streets in Beirut and major coastal cities such as Jounieh, Jbeil and Batroun were decorated with Christmas lights, powered either by solar panels or private electricity generators, in an attempt to lighten up the holidays in cities that had plunged into darkness months ago.

Malls are packed with shoppers, between whom the social differences are clearly visible. One toy store owner told Arab News: “Some shoppers buy expensive toys without even asking about the price first, while others go around the shop comparing prices and settle for the cheapest ones.”

The differences are even starker in clothing shops. Purchases are very limited in luxury stores, while the cheaper outlet stores, which have become more popular in recent years, are filled with shoppers.
However, supermarkets and grocery stores attract the most shoppers, who face the struggle of choosing between high-priced items and local, cheaper ones of lower quality.

Temporary Christmas markets were held in public squares to create an atmosphere of joy, especially for children. One visitor told Arab News: “Such activities really make us feel the holiday spirit. It’s nice to see so many people out. The circumstances are difficult but we are trying to overcome them.”

Claudine, a bank employee, told Arab News: “Everyone is preparing to celebrate the holidays in their own way. I did not decorate my Christmas tree this year. Decorations are too expensive. A Christmas tree costs 4,000,000 LBP to 15,000,000 LBP; that’s more than my salary. A pack of six ornaments is at least 500,000 LBP.”

“It all depends on the person’s salary and purchasing power. For instance, private-sector employees now receive parts of their salaries in dollars, which allows them to spend more than others.”

May, a mother of two and a teacher, told Arab News: “The priority this year is for the Christmas Eve dinner. People want to be happy, regardless of the circumstances, and the dinner table, be it simple or luxurious, brings the whole family together.”

Faced with these prices, families have avoided exchanging expensive gifts such as new cell phones and gold jewelry.
Nohad, a Lebanese citizen, told Arab News that she would rather have someone cover the cost of her medicines instead of getting a Christmas gift.

A study by the American University of Beirut this year on the cost of living concluded that “a Lebanese family needs at least five times the minimum wage to secure food.”

Seba, a young woman from the Bekaa region, told Arab News: “People are no longer able to buy fuel for heating, and they may spend the cold nights of the holidays wrapped in blankets or burning clothes and shoes in heaters instead of firewood and diesel.”

The financial collapse of 2019 has caused poverty to rise across Lebanon. According to the UN Economic and Social Commission for Western Asia, there are no less than 1.5 million Lebanese living below the poverty line, subsisting on less than $2.15 per day (about 114,000 LBP). The local currency has lost more than 95 percent of its value against the dollar.

Dozens of planes loaded with expatriates wishing to spend the holidays with their families arrive daily at Rafic Hariri International Airport in Beirut.

Walid Nassar, Lebanon’s minister of tourism, had expected about 500,000 expatriates to arrive over the holidays as part of a campaign launched by the ministry dubbed “Come Back in Winter,” potentially generating revenues of up to $2 billion.

Several hotels have recently reopened after being badly damaged in the August 2020 Beirut port blast. Pierre Al-Ashqar, head of the Hotel Owners Syndicate, says he expects a lot of bookings at hotels and ski chalets over the holidays.
Meanwhile, on the administative front, political differences are still impeding the election of a new president. This has angered citizens who have become frustrated with the situation, especially amid the increasing security concerns in a lawless state.

The Central Security Council has taken measures to prevent unrest. A security source told Arab News: “The measures include conducting security patrols, setting up checkpoints in various regions, and stationing security forces in front of churches and places of worship.

“About 90 percent of the military personnel will be on call, and all these measures aim to reassure people that security is maintained and all matters are under the control of the security services.”

The Lebanese Motorcycle Club, the YASA Association, and the Freedom Rider Association, with the support of the Internal Security Forces, organized an awareness campaign on traffic safety during the holidays.