Lebanese-Turkish talks kicked off on Tuesday 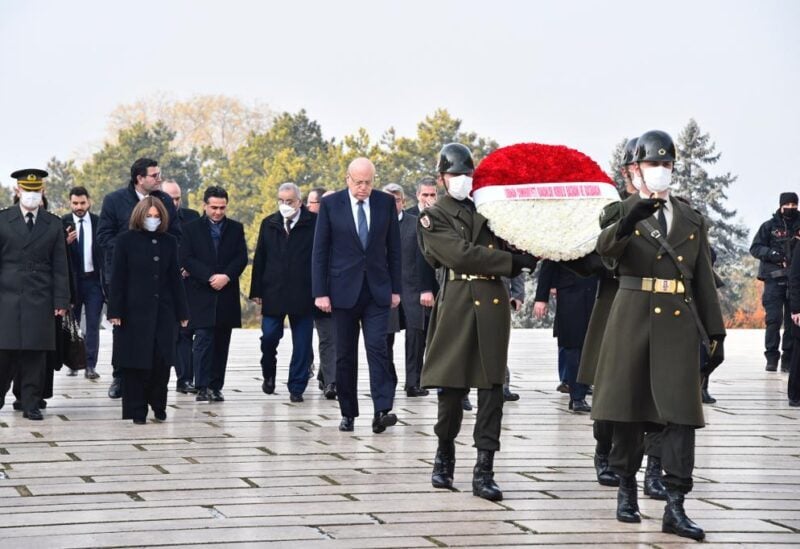 Turkish President Recep Tayyip Erdogan and Lebanese Prime Minister Najib Mikati met at the presidential palace in Ankara a short while ago to begin Lebanese-Turkish talks. PM Mikati and the Lebanese ministerial group had arrived at the presidential palace, where President Erdogan was greeted and escorted to the platform. The Lebanese national hymn was played first, then the Turkish one, then the artillery fired 21 rounds to greet PM Mikati.

The bilateral meeting between Presidents Erdogan and Mikati will be followed by an extended meeting with Lebanese and Turkish representatives, a joint news conference for the two presidents, and a honors dinner hosted by President Erdogan.

Meanwhile, Lebanese ministers met with their Turkish counterparts in conference rooms in one of the presidential palace’s halls. Minister of Foreign Affairs and Emigrants Abdallah Bou Habib, Minister of State for Administrative Development Najla Riachi, Minister of Tourism Walid Nassar, Minister of Energy and Water Walid Fayyad, Minister of Environment Nasser Yassin, Minister of Agriculture Abbas Hajj Hassan, Minister of Public Works and Transport Ali Hamieh, and Minister of Economy and Trade Amin Salam are among the Lebanese delegation.

The first stop of President Mikati’s tour to Ankara was a visit to the tomb of Mustafa Kemal Ataturk, the founder of modern Turkish nations.

President Mikati placed a wreath at the shrine before standing for a minute of silence and listening to the death hymn.