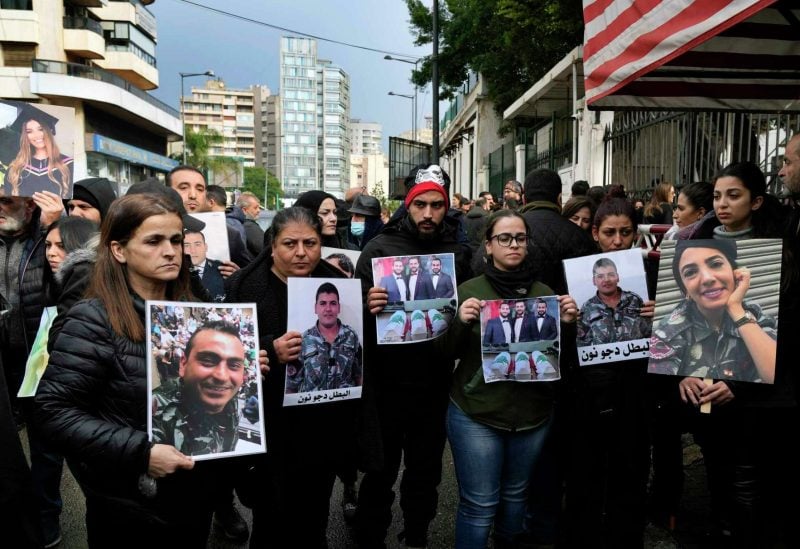 Relatives of the victims of the August 4, 2020, Beirut Port explosion hold portraits of their deceased loved ones during a protest in front of a Beirut police barracks in Beirut, January 16, 2023 [Bilal Hussein/AP Photo]

Police have questioned a number of the victims’ relatives after accusing them of rioting and destruction during rallies against the inquiry into the large explosion that occurred in Beirut’s port in 2020. The protests were in response to the investigation’s stalemate.

On Monday, 13 members of the family responded to a police summons while hundreds of other explosion victims’ relatives, lawmakers, and activists demonstrated in front of the Beirut police compound, where the questioning was taking place.

Some relatives threw rocks at the Beirut Justice Palace and burned tyres outside the building during last week’s protests, as they decried what they say is police interference in the blast probe.

The August 4, 2020 explosion killed more than 215 people, injured 6,000 and devastated entire neighbourhoods of the Lebanese capital after hundreds of tonnes of highly explosive ammonium nitrate, a chemical used in fertilisers, detonated in a port warehouse.

It later emerged the chemical had been shipped to Lebanon in 2013 and stored improperly at the warehouse. A handful of senior political and security officials knew of its presence and the threat it posed to the city but failed to take action to remove it.

Judge Tarek Bitar’s investigation into the disaster has been frozen since December 2021 after politicians he charged in the case filed legal challenges to the probe. No one has been tried or convicted over the blast.

Protesters on Monday condemned the country’s ruling elite. They say the elite’s lock on power has kept its members immune from accountability.

William Noun, who lost his brother Joe, a firefighter, in the blast, has been an outspoken activist.

Summoned Monday, he later claimed the authorities were trying to exhaust and intimidate the families.

Security forces raided his home and detained him overnight on Saturday after he spoke in a TV interview and criticised the judiciary.

“We want justice, and we want everyone who blew up the port to be held accountable, regardless of their political affiliation,” he said as he walked into the compound.

Among the protesters outside was the mother of Ahmad Kaadan, who was killed in the blast. She held a poster of her son and decried what she said was Lebanon’s “failed state and judiciary”.

“Instead of bringing in the officials with arrest warrants, they’re going after the families wanting to know who killed their children,” Kaadan’s mother, who did not give her name, told reporters. “In this country, those on the side of justice are getting arrested while the criminals are enjoying their lives.”

The families, Lebanese activists and human rights organisations have urged the United Nations to investigate the blast.