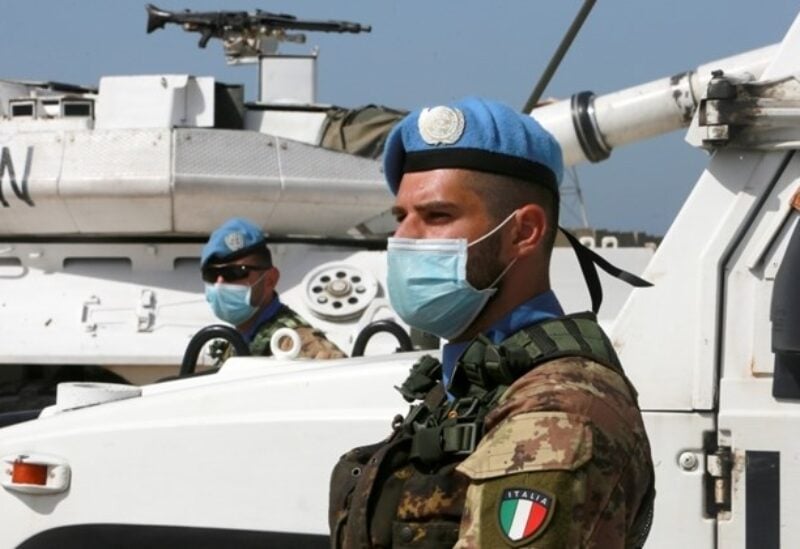 A UN peacekeeper (UNIFIL) wears a face mask as he stands past a UN vehicles in Naqoura, near the Lebanese-Israeli border

BEIRUT: A new round of indirect talks between Lebanon and Israel over the disputed maritime border was postponed Wednesday after Beirut rejected preconditions set by a US mediator at negotiations a day earlier, security sources said.

The sources said a sixth round of talks at a UN peacekeeping base in south Lebanon was supposed to be held in the morning but was postponed overnight after President Michel Aoun said Lebanon’s delegation should only negotiate if there were no preconditions, as previously agreed.

“President Aoun gave his instructions to the delegation not to go on negotiating with pre-conditions, but to adopt international law which would be the basis for guaranteeing continued negotiations to reach a fair and just resolution,” Aoun said after meeting with the Lebanese delegation, according to a statement from his office.

It said US mediator Ambassador John Desrocher had asked the Lebanese delegation to stick to the previously accepted demarcation.

Lebanon’s delegation, made up of a mix of Army officers and experts, had expanded the country’s claim in talks late last year, drawing up maps that push for an additional 1,430 square kilometers for Lebanon. The talks then broke down, only to resume Tuesday.

Negotiations between Lebanon and Israel began in October to try to resolve the dispute which has held up hydrocarbon exploration in the potentially gas-rich area, but the talks stalled and the negotiations were paused in early December.

The countries held four rounds of talks hosted by the United Nations at a peacekeepers base in Ras Naquora, the culmination of nearly a decade of diplomacy by the United States.

Israel and Lebanon have no diplomatic relations and are technically in a state of war. They each claim about 860 square kilometers of the Mediterranean Sea as being within their own exclusive economic zones.

In the second round of talks, the Lebanese delegation offered a new map that pushes for an additional 1,430 square kilometers for Lebanon.

Israel has already developed a natural gas industry elsewhere in its economic waters, producing enough gas for domestic consumption and to export to Egypt and Jordan.

Lebanon, which began offshore drilling earlier this year and hopes to start drilling for gas in the disputed area in the coming months, has divided its expanse of waters into 10 blocks, of which three are in the area under dispute with Israel.

Israel and Lebanon also held indirect negotiations in the ’90s, when Arab states and Israel worked on peace agreements. The Palestinians and Jordan signed agreements with Israel at the time but Lebanon and Syria did not.