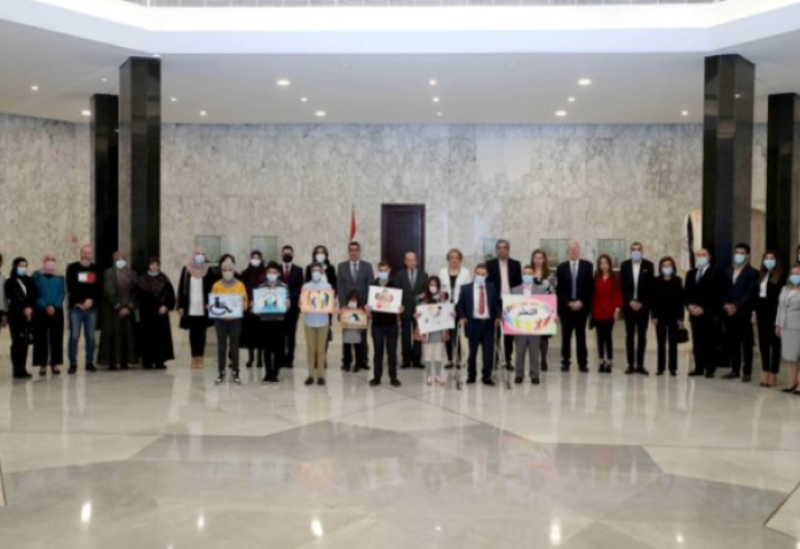 International Day of People with Special Needs”, declared by the United Nations on December 3

Lebanon revived the “International Day of People with Special Needs”, declared by the United Nations on December 3 of each year, in a ceremony headed by President of the Republic, General Michel Aoun, this morning at Baabda Palace.

The meeting was attended by: First Lebanese Lady, Mrs. Nadia Shami Aoun, Social Affairs Minister, Hector Hajjar, and representatives of the National Union for Disability Affairs in Lebanon, which is organizing on this occasion a human rights forum under the title “My Right”.

In the meeting, President Aoun stressed that “The issue of people with special needs is in itself a school in which many learn how to overcome difficulties and triumph over them with determination, patience and perseverance. These are values ​​we desperately need to move forward in the path of national recovery”.

President Aoun’s positions came during the celebration, which began with a greeting from Minister Hajjar, in which he thanked President Aoun and the first Lebanese Lady for receiving associations and children with special needs, who wanted to come to the Presidential Palace to present their rights and demands.

Then each of the children: Muhammad Al-Mawla, Zahra Amhaz, Hadi Maghbat, Fatima Al-Burji, Kinda Qassem, and Hadi al-Mahmoud, confirmed that “They have the right to be educated”.

They said “Mr. President, we would love that help us grow, and that you trust us and protect us from violence. It is our right to strive forward and to join specialized schools in order to obtain the required certificates, with the aim of integrating into work fields later, and securing an income for our families”.

They also demanded that they “Get the right to have someone hear them and take their opinion, so that they can live in this country in safety and peace, without problems, and that our voice be heard and that we have health care systems”.

The President of the National Council for Social Service, Deputy Director General of the Islamic Orphanage, Mrs. Salwa Al-Zaatari delivered a speech in which she saluted President Aoun, “In the name of 12,000 disabled people sponsored by 101 institutions concerned with rehabilitation and training services spread across the country”.

“21 years after the issuance of the Persons with Disabilities Law 220/2000, implementing decrees that safeguard their rights have not been issued. It is at the forefront of priorities when drawing up social policies for any country, so it is no longer acceptable for the law to remain a dead letter” Al-Zaatari said.

“The specialized social institutions that have partnership contracts with the Lebanese state represented by the Ministry of Social Affairs and which the state has decided since the early sixties to provide specialized services such as education, rehabilitation, care and treatment on its behalf, are heading today to closure, and many of them announced their inability to provide his services.

It is demanded that a number of services for these institutions be re-launched, as follows:

-Securing an exceptional financial increase for social welfare institutions through the application of the 2012 cost price, which was issued at the time by the competent committee in 2011.

-Providing donations from donors to institutions and associations, in addition to supporting transportation allowances for children and their nannies”.

Then Minister Hajjar gave a speech in which he stressed the meanings of this day, considering that people with special needs constitute “The school of life for those who complain and resent the daily transient difficulties that we face with them. This school defies the difficulties and rejects the word impossible”.

“For this school, the pleasure of success lies in the difficulty and its transformation into great joy. Every hope is dependent on the will, and the will of the disabled is his weapon for survival, and with it, his success is inevitable despite his disability” Minister Hajjar added.

Minister Hajjar hoped that the state would become capable and supportive of this group by ratifying the international agreement for them and working on its implementation, as well as emphasizing the implementation of Law 220/2000 and its amendments in all its aspects, which better secures the rights and interests of people with special needs.

Hajjar also indicated that he “Assumed the responsibility in the Ministry of Social Affairs, and had sought to secure contracts for people with special needs and develop them for the public interest, and speed up their transactions in the relevant ministry”.

The President welcomed the attendees at Baabda Palace, especially on this particular day, stressing that he pays special attention to the issue of children with special needs, because they are an integral part of any society that places human dignity and its preservation in all its children above any consideration.

The President also considered that disability is an example of heroism, so how if it is children who give us this example.

“The issue of people with special needs is in itself a school in which many learn how to overcome difficulties and triumph over them with determination, deliberation and perseverance. These are values ​​we desperately need to move forward in the national recovery process. Let us make each of our days a day to celebrate overcoming a difficulty, so that we all realize that hand in hand we can build our society out of its difficulties. This is the biggest challenge for us, and we can learn from it on this international day, which we celebrate together” President Aoun said.

“Exactly two years ago, you were here, and we revived this day together with the Ministry of Education, and the inclusive schools project was launched for students with special needs who can follow regular lessons, and from that time until today, 30 public schools have been equipped for this purpose. We will continue to work with relevant ministries to generalize the integration experience to a larger number of these schools nationwide” President Aoun continued.

Moreover, President Aoun stressed that there is a greater work to be done, on a purely humanitarian level, based on love and will.

“I extend a special greeting and a special thanks to all those who undertake the service of people with special needs, children and youths. We hope that this mission will continue, and all support and heartfelt congratulations to all” the President added.

Finally, the children presented a commemorative plaque to President Aoun and the First Lebanese Lady, who shook hands with the children, and memorial photos were taken.