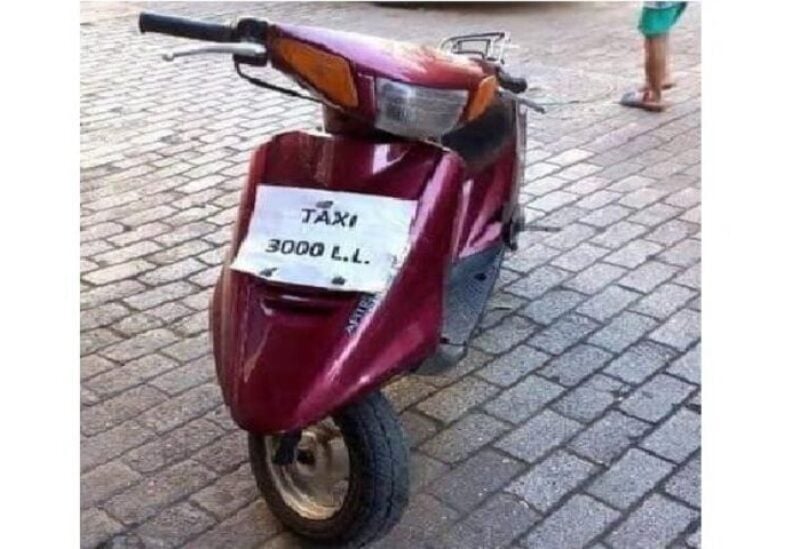 Amid the stifling economic crisis, the devaluation in Lebanese pound, and the subsidies lifted on fuel and other commodities people are unable to afford the cost of transportation especially that taxi and bus fees are set at the black-market exchange rate of dollar.

Today, new alternatives have appeared in some Lebanese regions, where many have converted their motorcycles into a “taxi” to transport passengers to nearby places, thus eliminating the need to pay the cost of taxis, which have become expensive due to fuel shortage.

This phenomenon is spreading more widely across Lebanon, especially in the Bekaa Governorate. Motorcycles “taxi” has become trending in Beirut especially with the beginning of the school year, and several people are transporting students with fees lower than the cost of school buses, which in some private schools in the capital reached $200 per month.

The mother of one of the students told Sky News Arabia: “I was forced to resort to a bike driver to take my son to school, despite knowing the risks that might result, because I was not able to secure the cost of the bus in addition to the school fee. I had to choose one part of the two.”

“The driver and my son are wearing the helmet, but I’m afraid that winter is coming and I didn’t think for a moment what it would be like then,” she added. We are used in Lebanon to think day by day, and we do not know what tomorrow holds for us.”

Azzam al-Mir, who owns a motorcycle “taxi” in Tripoli, said: “The cost of moving in a taxi reached 20,000 LBP recently, after it was 2,000 LBP for a passenger, and this has prevented citizens from moving in cars, while drivers were facing difficulties in securing gasoline, and sometimes we were purchasing it in the black market at a cost of 400,000 LBP.”

Al-Mir added: “We had no choice but to adopt the motorcycle for transportation, and we decided with a group of drivers to set the price at 3,000 LBP per passenger. This amount is suitable for the driver and passenger alike.”

He explained: “We are taking measures and precautions against rain in the winter,” noting that the bike can accommodate one passenger and will provide him with a special umbrella.

The legal status of bicycles is similar to that of cars, as their registration with the Automobile and Motor Vehicle Registration Authority is not different from the registration of other vehicles.

The driver must pass exams before obtaining a license to drive a motorcycle, which costs about 250,000 LBP, a source in the Cars and Motor Vehicles Registration Department told Sky News Arabia.

The Central Security Council had issued a decision in 2008 banning motorcycles from roaming in Beirut at night, but many of these bikers refer to a “great negligence in implementing this decision” two years ago, as they move at night on their bikes without being exposed to the security forces.

Beirut and Lebanon in general live in chaos for motorcycles, as the law does not apply to them, especially after the economic crisis that forced both the policeman and the driver to secure the easiest way to manage things, not to mention the chaos of “delivery” bikes that were introduced during the Corona pandemic.

Citizens pay more than 200,000 LBP for 20 liters of gasoline, while the queues at the gas stations are still the same.