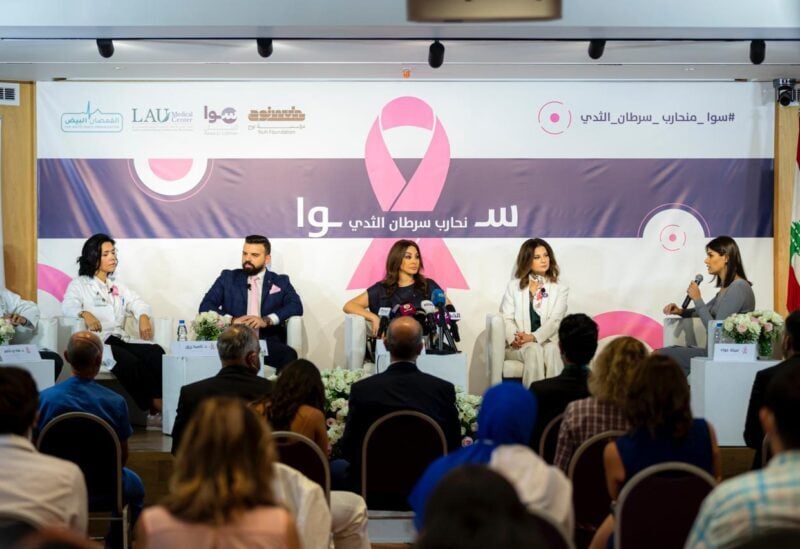 Nuh Foundation, in partnership with Sawa for Lebanon, in cooperation with the Medical Center at the Lebanese American University – Rizk Hospital and the White Shirts, and in the presence of star Elissa, ambassador of breast cancer awareness, launched today, Wednesday, the “Together (Sawa), We Fight Breast Cancer” campaign, which aims at conducting 10,000 radiological examinations for the early detection of breast cancer, in Hospitals and medical centers in all Lebanese regions.
In light of the economic crisis that Lebanon is living, and the failure of this political class and successive governments to stand by women, support them, and urge them to undergo a mammogram for early detection of breast cancer, this campaign was born, to stand by the women and support them, by urging them to conduct an early examination and informing them about the symptoms that they should pay attention to, especially in light of the decrease in the rate of the radiological examinations in the last two years.
“I loved to participate in this campaign, because of a personal experience I went through, which prompted me to contribute to spreading awareness among women, because the early examination, contributed to saving me from this terrible experience” said Elissa, adding “I will always stand by all the women of the country to protect them. And as I defeated cancer before, today I invite them to go to the medical centers in the #SawaWeFightBreastCancer campaign, because only the mammogram protects.” Elissa also thanked all the organizers and contributors to this campaign.
For his part, Dr. Sami Rizk, Executive Director of the Lebanese American University in Beirut, welcomed this initiative, which he described as valuable at the national level, which is not the first of its kind by these institutions that preceded by the campaign to secure vaccines for the Corona epidemic, and today launching a new initiative to urge women to conduct an early radiological examination. He thanked the curators for their constant keenness to make the health sector a priority, stressing that women’s health is the priority today, hoping to be an example to follow in the health sector in Lebanon.
Medical Director of the Lebanese American University, and member of the White Shirts Organization, Dr. George Ghanem said: “The health sector today is in danger as a result of the state’s negligence to this essential artery, and all the initiatives from the private and personal sectors that have been established until today, have contributed to the steadfastness of this sector. Since health is the basis, especially in these conditions, the White Shirts Organization has taken upon itself the protection of human rights and health, and the rights of the protester, the citizen, the patient, doctors and the health sector in general
The official spokesman for Sawa for Lebanon Movement, Dr. Hadi Murad pointed out that, “when the state failed to play its role, the Sawa for Lebanon Movement and the Nuh Foundation, were fighting the battle of the state, because the right to health and the right to prevention are sacred in the Bill of Human Rights.” He said, “Since women are the backbone of society and the element of life, it was necessary to stand by them in these dire circumstances, and encourage them to conduct an early examination for early detection of this malignant disease.” He continued, “That’s why I am honored today that we are launching the #SawawefightBreastCancer campaign to cover mammograms for 10,000 women nationwide.”
At the end of the ceremony, a panel discussion was runned by media figure Nabila Awad, with the star Elissa, Dean of the Faculty of Medicine at the Lebanese American University, Professor Sola Bahouth, Head of the Blood and Cancer Department at the Lebanese American University, Dr. Hadi Ghanem, Sawa for Lebanon Spokesman, Dr. Hadi Murad and Director of the Radiology Department for Medical Students at the Lebanese American University, Dr. Tamina Rizk.
During the ceremony, the registration mechanism was announced, and was published on the official website of Sawa for Lebanon Movement and its social media platforms.