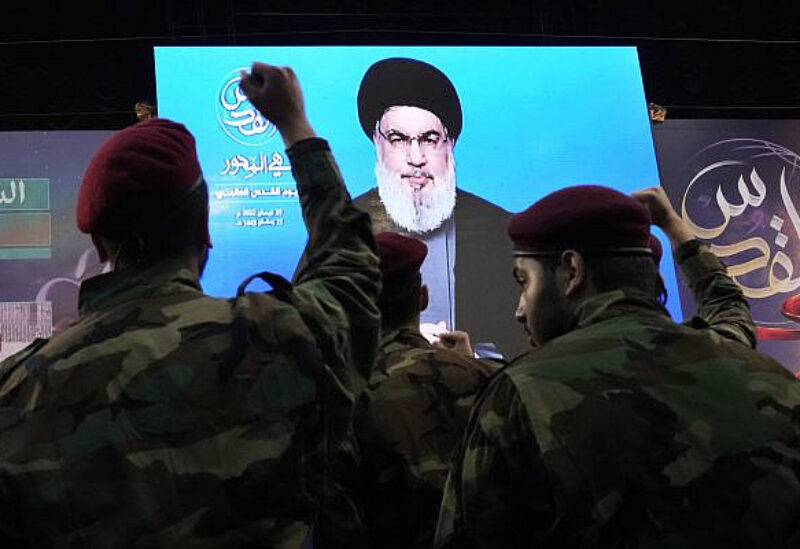 File: Hezbollah fighters raise their hands as their leader Hassan Nasrallah speaks via a video link during a rally to mark Jerusalem day or Al-Quds day, in a southern suburb of Beirut, Lebanon, April 29, 2022. (AP Photo/Hassan Ammar)

As these lines are being published, Amos Hochstein, the US Senior Adviser for Energy Security, has arrived in Israel unexpectedly to further talks on the maritime border with Lebanon. Hochstein is attempting to complete an elusive task that many have attempted before him (including himself in previous administrations): securing an agreement between long-time foes Lebanon and Israel on the Economic Exclusive Zones (EEZ) of both countries, and the subsequent exploration rights of natural resources. Some of these areas are disputed and cannot be explored until agreements are secured; some of the areas are under unchallenged Lebanese sovereignty but cannot be explored as long as Lebanese Hezbollah maintains its chokehold on the government. And some, under full Israeli sovereignty, have already begun the process of exploration and extraction of natural gas.

While Israel has repeatedly expressed that it wants to reach an agreement on the maritime border between the countries, two truths need to be clearly stated: one, as long as a terrorist organization is behind the wheel on the Lebanese side, no agreements can be trusted or taken seriously by Israel or the international community; and two, if Israel does intend to enter negotiations in the current state of affairs, a transitional government in Israel cannot by any means make serious long-term decisions or concessions.

This is not necessarily a new reality: Lebanon has refused to reach agreements with Israel for many years despite the enormous economic potential, under both Democrat and Republican US leadership, at the expense of the Lebanese economy and the continued suffering of its citizens. It was only recently that Hezbollah and the Lebanese government realized that they must enter some kind of negotiations with Israel, seeing that Israel had already begun to extract gas in its EEZ, coupled with rising domestic pressure in Lebanon over the rampant corruption and mishandling of government funds. Time, as well as excuses, simply ran out.

Lebanese civilians deserve to enjoy the benefits of their rich coast, just like Israel does. And regardless of the situation with Israel, Lebanon cannot even secure steps to explore natural gas off the undisputed areas of its EEZ. The power struggle between the Lebanese state and Hezbollah as well as Lebanon’s inability to provide assurances for potential international investors hinder its capacity to make serious moves on this front. Without Lebanon’s ability to explore for gas, all that is left is for Hezbollah to intimidate Israel and the international community over the Karish gas field located in the undisputed waters of the Israeli EEZ. The Lebanese claim that the maritime border between Israel and Lebanon crosses this field. Experts and satellite photos determine this is not the case. It’ll be better for Lebanon to focus on exploring its own coast for gas rather than trying to reap the benefits of a successful Israeli exploration in Israeli territory.

Furthermore, after repeatedly releasing threats and videos claiming Hezbollah has the means to strike Israeli off-shore installations at will, one should ask: who benefits from Hezbollah’s bullying rhetoric? It is certainly not the Lebanese economy, nor its struggling civilians. Israel might be hindered, but it will continue exploring its EEZ regardless, protected by one of the strongest navies in the Middle East. So other than a show of force that helps no one, what is the purpose of these tactics? It seems that dealing in terrorism has made Hezbollah seniors forget how to use any tool other than intimidation, and it shows.

Hezbollah has dragged Lebanon into its worst political and economic situation in history. Hezbollah is blocking any possibility for the Lebanese government to reach sensical agreements with Israel or even explore its own natural resources. And now Hezbollah attempts to intimidate an American effort and a  transitional government in Israel to make dangerous concessions.

The only possibility I see for any Israeli government to consider making concessions to Lebanese maritime demands is a trustworthy commitment from Lebanon with international assurances for the disbandment of Hezbollah, or an unlimited commitment by Hezbollah not to initiate acts of aggression against Israel. Other than that, a transitional government in Israel cannot be bullied by a terrorist organization in Lebanon to make harmful long-term agreements that will have a negative effect on both economies for years to come. Hezbollah can not be trusted, nor can the Lebanese government. And the time for signing such a monumental agreement is not now.

Source: The Times Of Israel