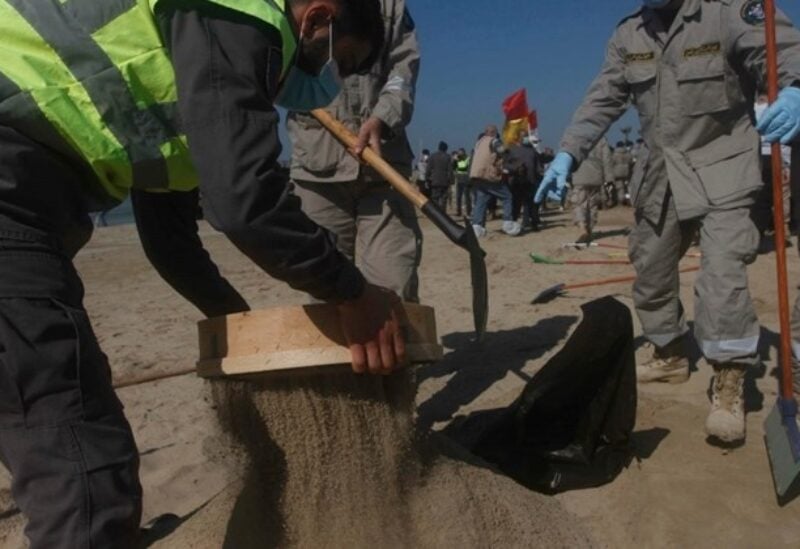 BEIRUT: Nearly two months on from the oil spill off the coast of Israel that polluted the Lebanese coastline, local authorities are still witnessing daily new arrivals of sticky black lumps onto the sand, creating an environmental disaster for citizens and wildlife and threatening to harm the start of the beach season for local businesses.

A report published Thursday, the second survey assessing the impact of the oil spill on Lebanon’s shores, by the state-run National Council for Scientific Research detailed high levels of pollution at 62 percent of locations assessed up and down the coast.

Dr. Milad Fakhry, director of the Marine Science Center at the National Council for Scientific Research, told The Daily Star that the oil pollution had reached the entire Lebanese coast.

“With each new storm [hitting Lebanon], we are getting new waves of oil, tar … before it was concentrated in the south, but now it is spread all over the Lebanese coast.”

The report assessed oil deposits at 32 coastal locations including Naqoura, Sidon and Beirut, with 20 areas marked as level 5 by the researchers, equaling a high level of pollution. Other locations further north including in beaches in Aamchit, Batroun and Tripoli were scaled down to 3, a “medium” level of pollution.

As a result of the disaster, the Regional Marine Pollution Emergency Response Center for the Mediterranean Sea a subsidiary of UN Environment Program were called in by the Environment Ministry on March 9, a few weeks after the spill first hit Lebanon’s shores on Feb. 22. Last week the group released a statement regarding their findings:

“Patches of black petroleum and tar balls were found in coastal areas, mostly in the South, in particular in Nakoura, El Bayada, El Mansouri and in the Sour protected areas (Chawatina, Sour Rest house), as well as the protected areas of El Abbasiyeh.”

Tyre Mayor Hassan Dabouq told The Daily Star that the extent of the damage was “very, very bad” and that the municipality was still waiting for a long-term plan from the UN teams and ministers as there was “nothing concrete on the ground until now” to deal with the disaster.

Israeli authorities are still determining who was responsible for the oil spill that dropped the pollutant into the sea in early February. The Israeli Environment Minister recently blamed Iran for the ecological disaster, determining that the spill was caused by an oil tanker carrying pirated cargo from Iran on its way to Syria.

For authorities working here, the lack of communication from Israel has added further challenges to the ecological disaster. Fakhry explained:

“No coordination, no information, nothing from them, we have to put assumptions [as to] what happened, [and] why they received a huge amount on their coast.”

There has so far been an enthusiastic turnout from volunteers helping to clean up, according to Dabouq. Mainly locals from the affected areas but also teams from Beirut who have headed south to Tyre Saturdays. Each blob of oil has to be removed by hand — a tedious and slow process, done by first raking the sand, lifting the debris into a sieve and filtering out sticky oil globules.

However, Ziad Samaha, program manager for the marine and coastal zone development at IUCN, explained that the clean-up operation ould not be reliant on volunteer-led efforts.

“We are finalizing an administrative procedure to launch cash for work incentive,” he said, adding that IUCN is hoping to begin the operation with workers this week. “We planned four weeks with around 50 workers.”

As well as this, IUCN has developed a hydrochloric filtering machine that will be able to sift the tar out of the sand in a quicker and more efficient manner than by hand for the cleanup in Tyre. So far, tools and equipment have been donated by UNIFIL and IUCN to assist municipalities.

Samaha emphasized that other factors have to be taken into account during the cleanup. For example, whether the polluted area might be a special protected area (which is the case in Tyre), or a coastal vegetation area, for example. “No one size fits all for oil clean up,” he said.

In Lebanon, the devastation of the oil spill is not just a concern for the ecological state of the country, but also adds further distress at a time of intense political and economic instability for citizens.

“The impact is not only environmental, [but] also on the socio-economic condition and situation of these coastal communities,” Samaha explained.

“People are less likely to go to the beach, put [their] towel down and it gets stained, plus people are afraid to go and get contaminated with tar.”

The experts have been working to clarify concerns that it is still safe to swim and eat locally sourced fish. But Samaha said citizens should still take responsibility and be wary of where clean-up operations are taking place to avoid cross contamination, and mentioned the use of online activism to address such issues.

Moreover, he said that having a clean environment is beneficial for local business, which is particularly significant considering the current fragility of the Lebanese economy.

“[We are] helping nature because nature helps us. It is a good destination for local or international tourists to spend money, [and] help people whose livelihoods depends on it.”