Woman threatens to set herself on fire inside Lebanese bank 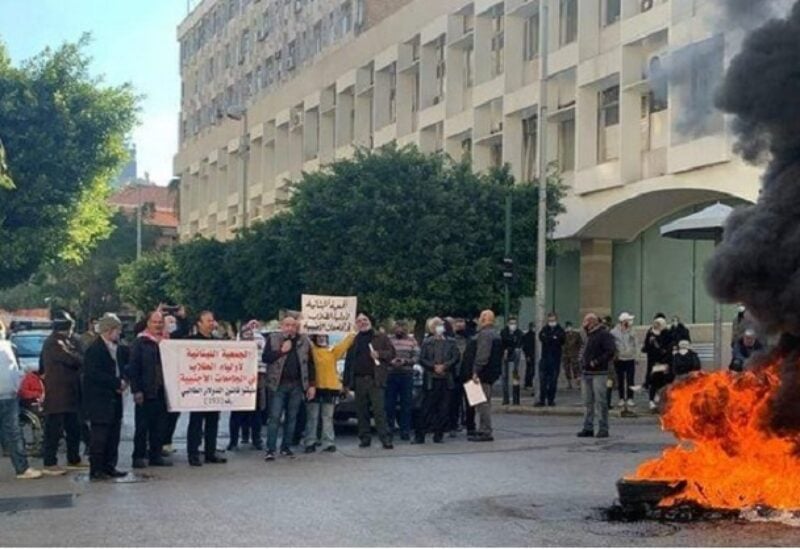 A Lebanese woman threatened on Monday to set herself on fire inside a bank located in Hamra region after the concerned authorities “refused to transfer money to her son abroad,” the National News Agency reported.

The agency said the incident occurred during a sit-in called for by the Lebanese Association for Parents of Students in Foreign Universities.

Parents of Lebanese students abroad protested on Monday outside the Banque du Liban (BDL) headquarters, calling for a government decree to allow them to transfer US dollars at the official exchange rate of 1,500 Lebanese pounds to the dollar.

Demonstrators blocked roads for some time as they vowed to “hold further protests until demands are met.”

They entered some banks in Hamra Street, expelling employees from their offices and shutting down their gates, warning all those wishing to enter such banks “because the banks are the reason for the country’s economic collapse.”

Parents of the students also dropped by other banks and read a statement calling for the need to pass a government decree pertaining to the US dollar transfer abroad and to make those in power assume their responsibility.

They pressured the BDL and other banks into implementing a government decree to allow them to transfer up to $10,000 a year at the official exchange rate of 1,500 Lebanese pounds to the dollar to cover the students’ tuition and expenses.

Until now parents and students say the law is being ignored, with banks and exchange dealers refusing to make transfers at the set rate and instead demanding the market rate, currently around 9,400 Lebanese pounds.

Central Bank Governor Riad Salameh told Reuters that “the law needs applications decrees from the government not from BDL.”